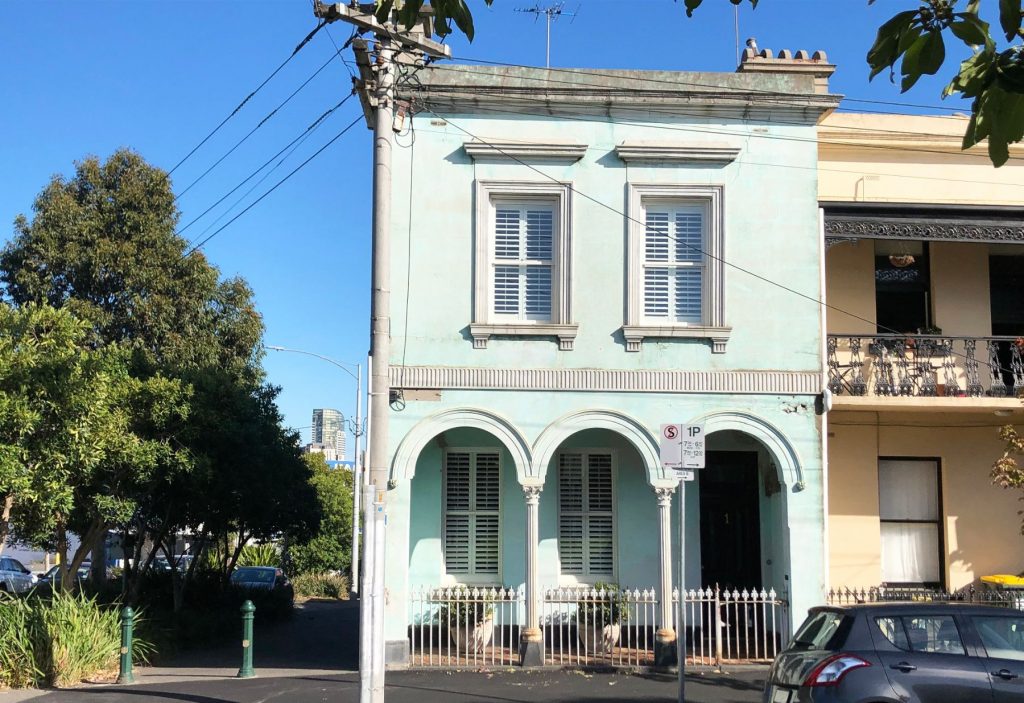 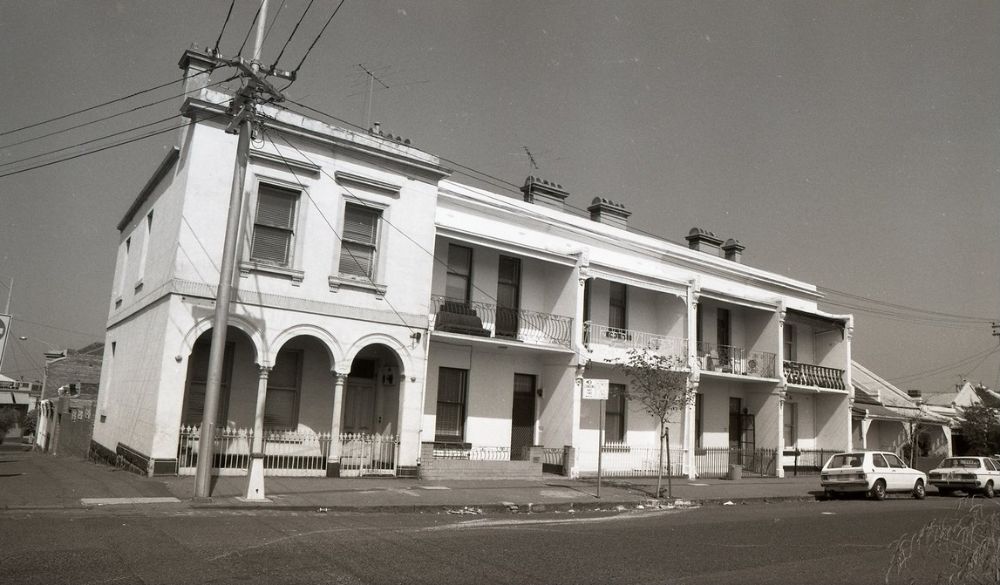 4. John Austin Keens was a wholesale and retail Ironmonger situated at 161 Elizabeth Street and 209 Swanston Street Melbourne according to the 1861 Sands & McDougall Melbourne Directory, page 231. It is thought he may have been the reason for the naming of Austin Place, the rear lane way. John Austin Keens was born on 20 July 1828 in Manchester, Lancashire, the son of Ann and John. He had one daughter with wife, Agnes in 1860. Agnes Murray Thom was born on 20 August 1837 in Glasgow, Lanarkshire, her father, Hugh, was 36, and her mother, Susannah, was 33. She died as a young mother on 4 May 1868 in Melbourne, Victoria, at the age of 30. 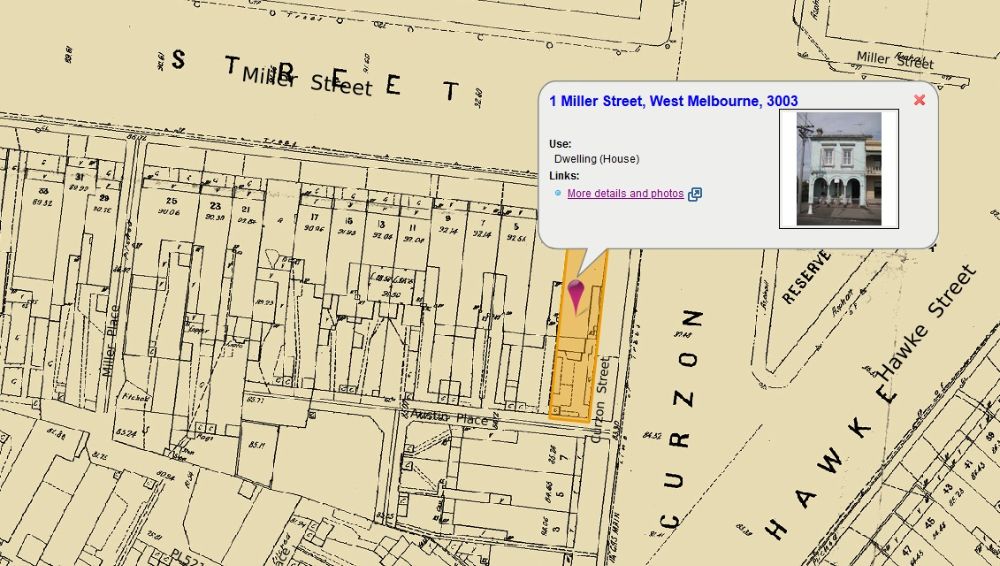 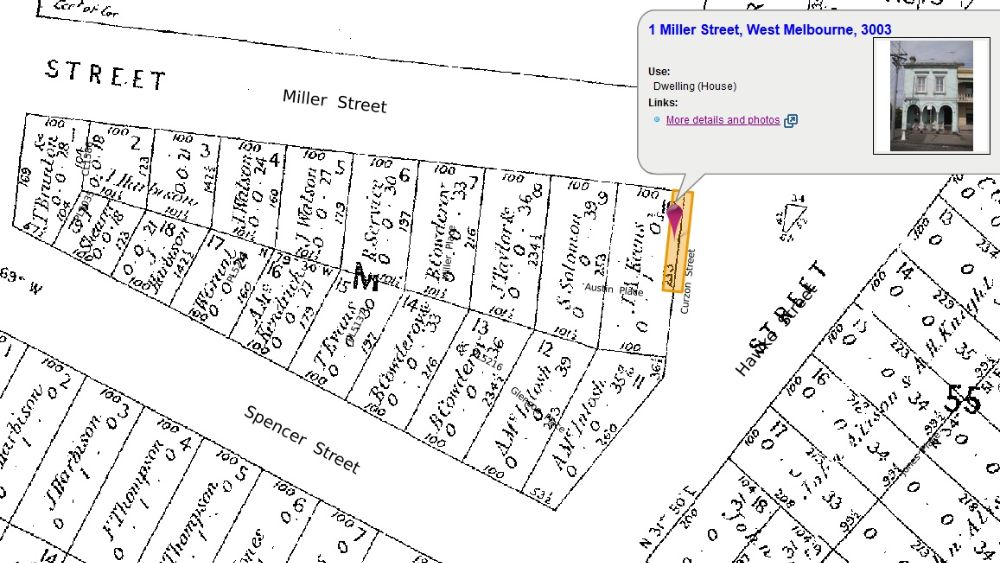 Street: Milton-1 (we believe notice should have read: Miller-1)

Type: Six room house, with a private back yard garden.

Side elevation of 1 Miller Street has been altered, and a garage and high masonry wall added to the Curzon Street frontage. 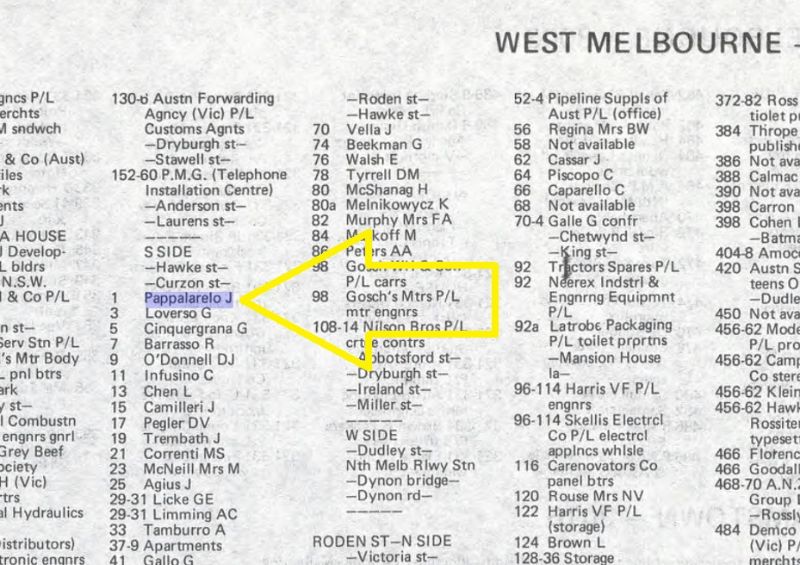 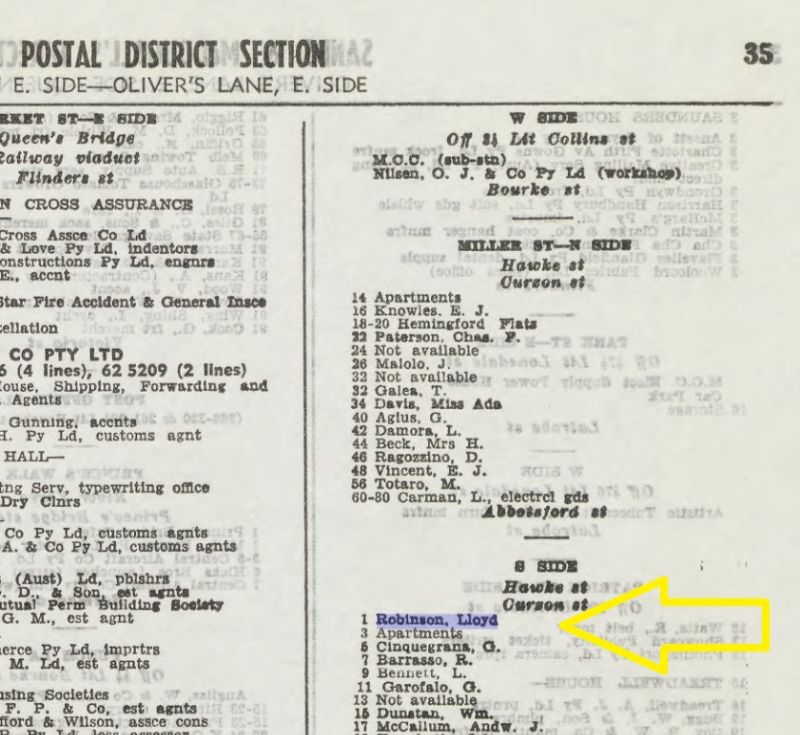 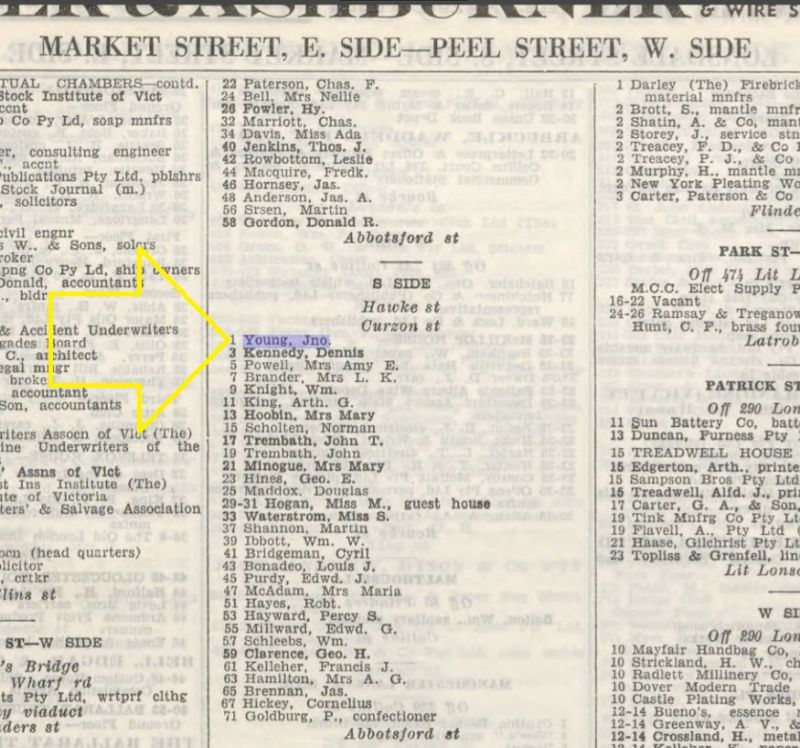 William Lewin Orr was born in May 1855 in Sea, his father, Hugh, was 43 and his mother, Christina, was 41. He married Madeline Mary Helena Laing in 1876. They had ten children.

ARRIVAL OF THE H. R. N S. N. CO.’S STEAMER ” WILLIAMS.” This vessel, the second of the Hunter River New Steam Company’s steamers, arrived at Morpeth about half-past nine o’clock on Thurs-day morning, and was greeted with loud cheering on her reaching the wharf, a reception she met with, indeed, at every point she touched at in coming up the river. This handsome boat was built by Messrs. Scott and Co., of Greenock, and the machinery and boilers by the well known engineers Messrs. M’Nab and Clarke. She was launched from Messrs. Scott and Co.’s yard, at Cartsdyke, on 21st October, 1854. Her dimensions are the following : extreme length 161 feet, length from inner foot of the main stem to the forepart of the stern post abaft 155 feet, breadth amid-ships 20 8-IO feet, depth amidships 11 feet, register measurement 199 96-100 tons, engine room 44 4-10 feet. She has a round stern, is iron clincher built, with standing bowsprit, and rigged as a three-masted barque; no galleries ; with the ” Emu ” as a figure head. By permission of the custom house authorities she was allowed to be registered at Sydney. On 10th January, 1st, she sailed from Cork, having lain there for six days on account of the head winds in the channel ; having on board as passengers, besides the wife and family of the captain, Mr. J. Moon, the families of the engineer and other officers. She came out with her paddles shipped, but only steamed seven days, and called at no ports during the passage. During the first part of the voyage she had light winds, but on 2nd May, on’ Cape Leuwin, she was caught in a hurricane. During the gale the vessel was very lively, and sustained a very trifling damage ; thus proving her to be a first-rate sea boat, and perfectly able for any storms she may encounter on the coast. In this hurricane the barometer fell lower than the captain had ever witnessed before. During the gale one of the ladies gave birth to a child, who is now stout and healthy. The only vessels spoken with connected with these colonies on the voyage out were-on 3rd March the American ship Eastern State, 38 days out from New York, with emigrants to Melbourne, lat. 22° S., long. 32° 25′ W. ; and on May 12th, the American ship Rio Grande, off Cape Otway, from Melbourne. She arrived at Sydney late on the evening of the 14th instant, having been 125 days on her passage from Cork. On Wednesday evening, at eleven o’clock, without any repairs or cleaning, she sailed again for Morpeth ; she reached Newcastle at six o’clock on Thursday morning, and Morpeth about twenty minutes past nine o’clock. On visiting her, shortly after her arrival, all who saw her were struck with the remarkable cleanliness and comfort of the vessel after so lengthened a passage, showing no difference from the other boats, except the foulness of her bottom and the rubbing off of the paint. Her main cabin forms a beautiful Baloou, measuring 34 feet by 20 feet, and having 24 berths. The sofas are all covered with horse hair, a decided improvement on the fittings of the Hunter, the leather coverings of her sofas already showing marks of discoloration. Connected with the saloon is the gentleman’s dressing room, fitted up with washstands, and every convenience of the toilet. The ladies’ cabin has eight berths, and measures 20 feet by 6£ feet, with similar comforts to that in the gentleman’s cabin. Placed amidships are the Captain’s, chief officer’s, and engineer’s room, and the baker’s shop. The fore cabin has eighteen berths, fitted up plainly but comfortably, and measures 12 feet by 20 feet. The forecastle for the seamen is very comfortable. Her machinery takes up 110 tons, and she has carrying accommodation for about 200 tons of cargo. Her decks are very roomy, and during her voyage out she | showed herself to be a very dry boat, having rarely shipped a sea. She is worked with two oscillating engines, of sixty horse power each, I and has also a donkey engine of two horse power for working the pumps, the fire engine, and for discharging or taking in cargo. We understand she is to leave for Sydney on Wednesday, when she will be placed in the dry dock, Bud cleaned and repainted, previous to her being placed permanently on the line be-tween Morpeth and Sydney. 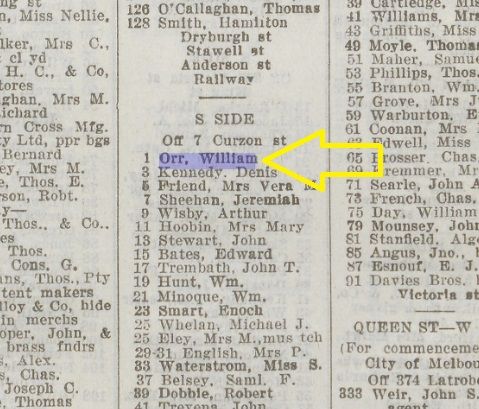 William Sturgess, 1891 at Moonee Ponds.
Sturgess, a senior trustee, was a member of the Loyal Alliance Lodge, M.U.I.O.O.F of North Melbourne. 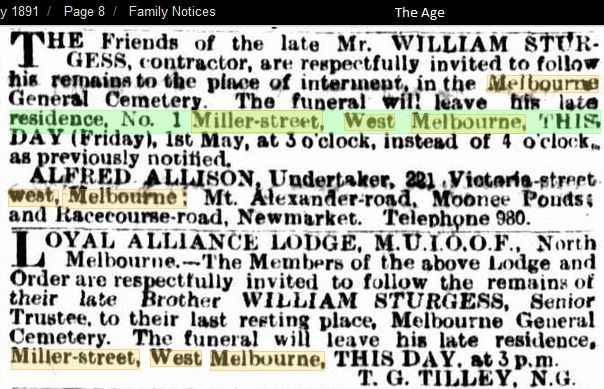 William Sturgess was born around 1829 in Cheshire, England, his father, William, was 31 and his mother, Mary, was 32. Wife Fanny Watson was born in 1829 in Manchester, Lancashire.

William Sturgess married Fanny Watson in 1853 at St John’s, Deansgate, Lancashire England. His occupation on the certificate stated he was a bricklayer.

William 23 years and Fanny Sturgess, 22 years of age, arrived in Port Phillip in 1853 onboard the ship Thames departing from Liverpool England. Fanny and William had 9 children. 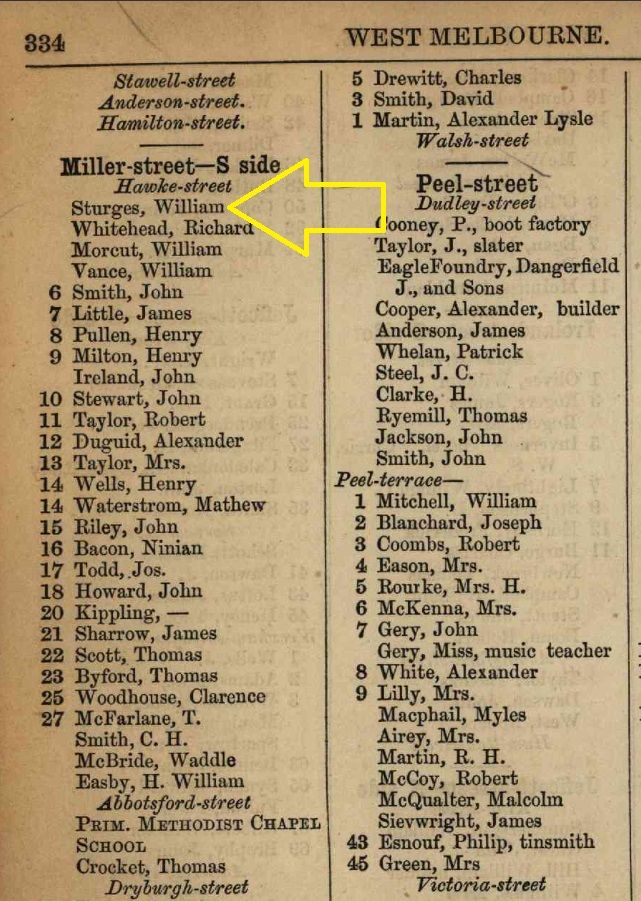