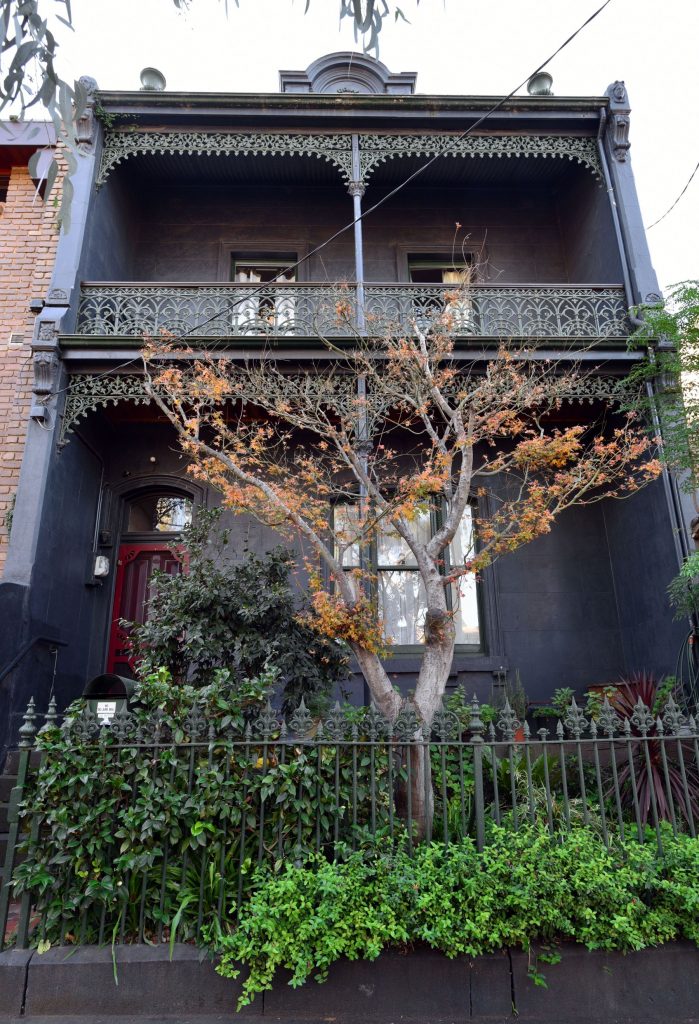 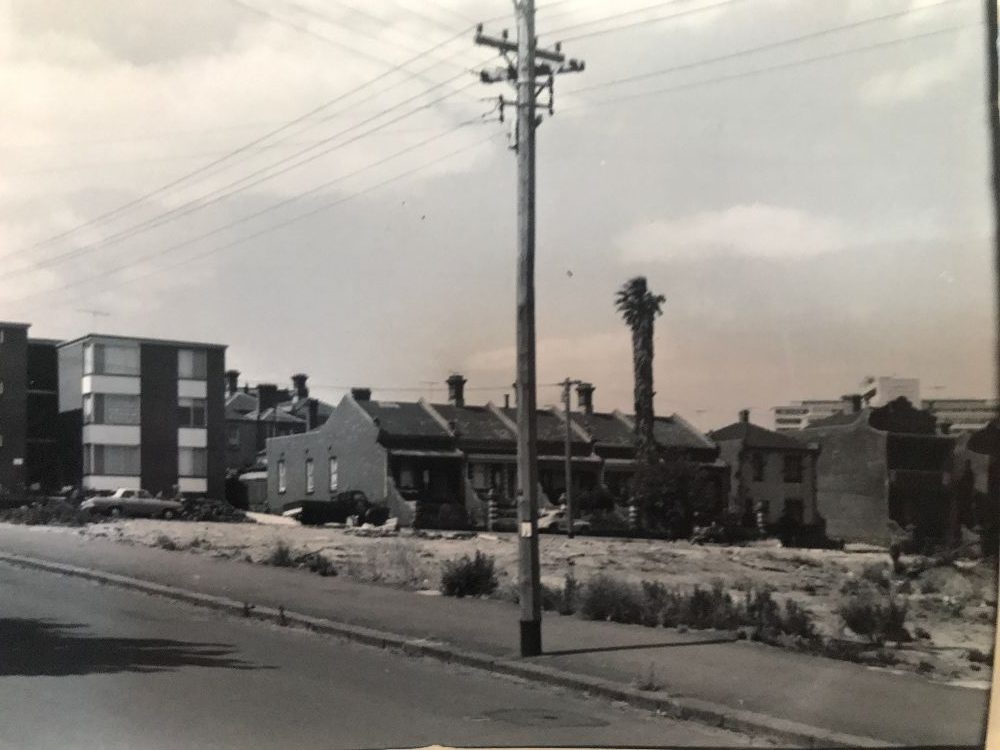 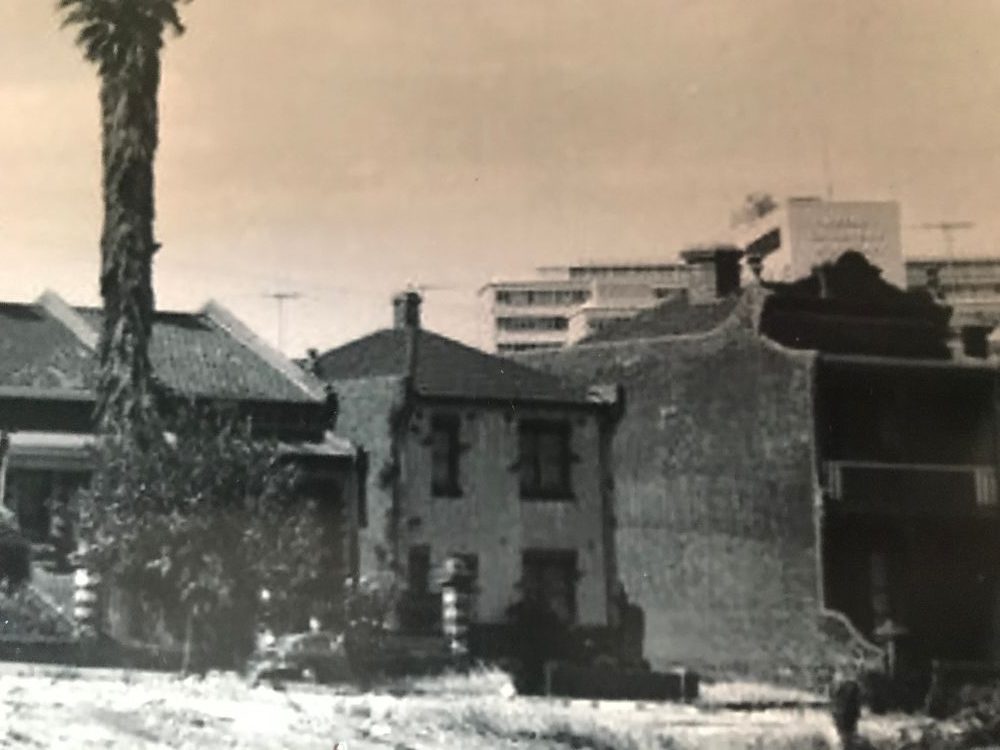 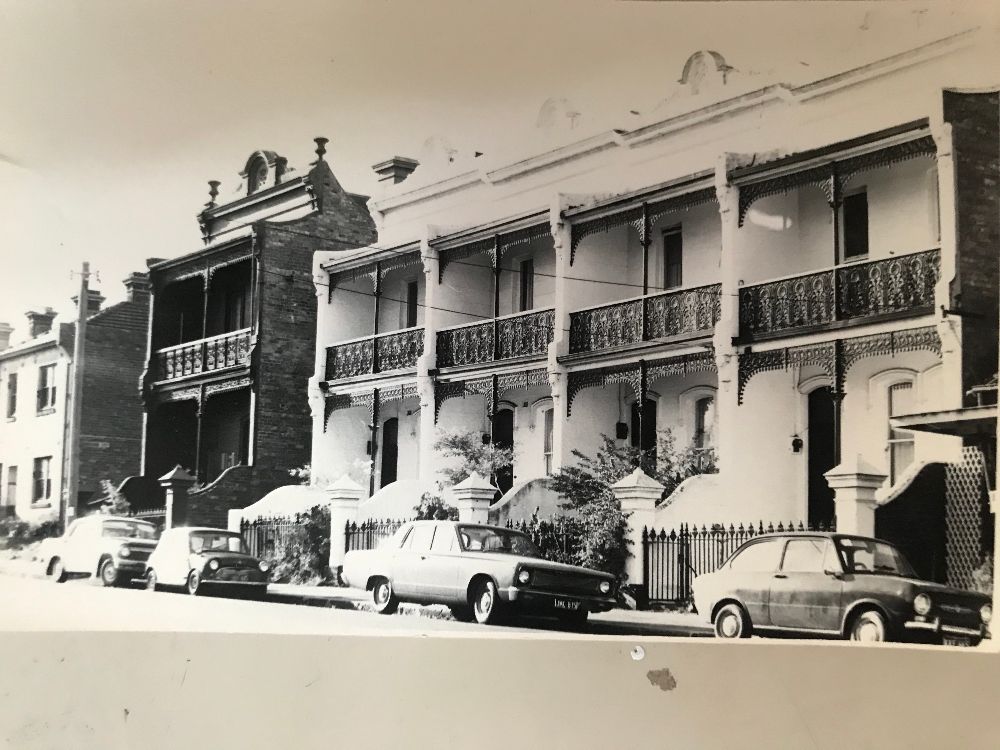 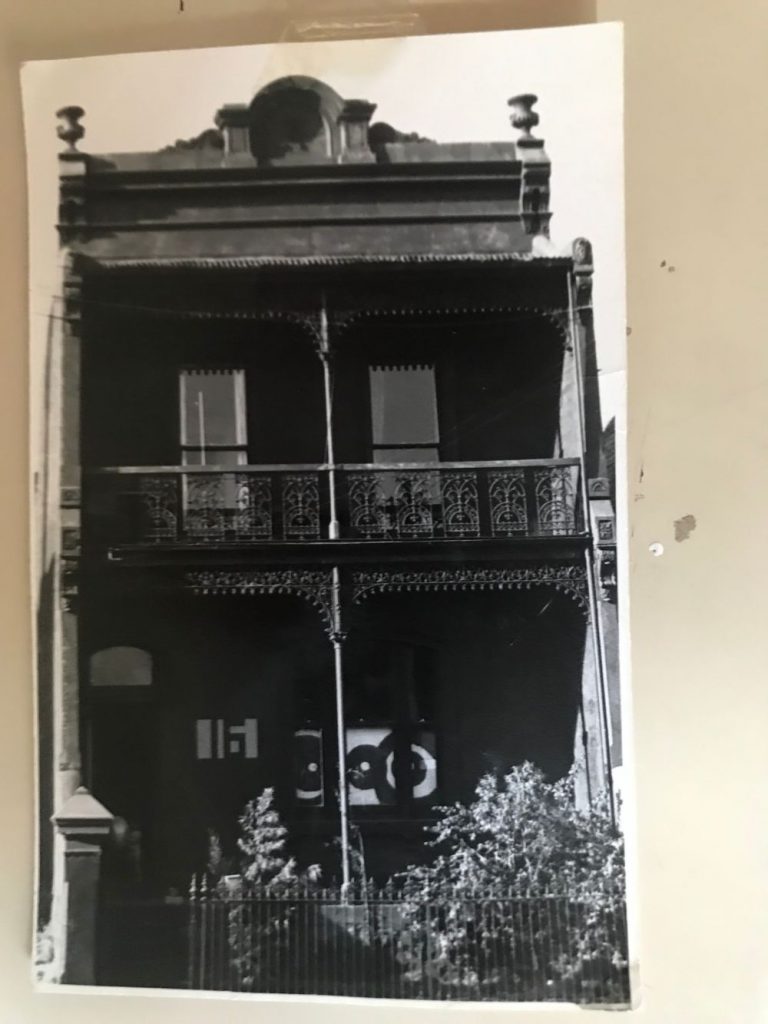 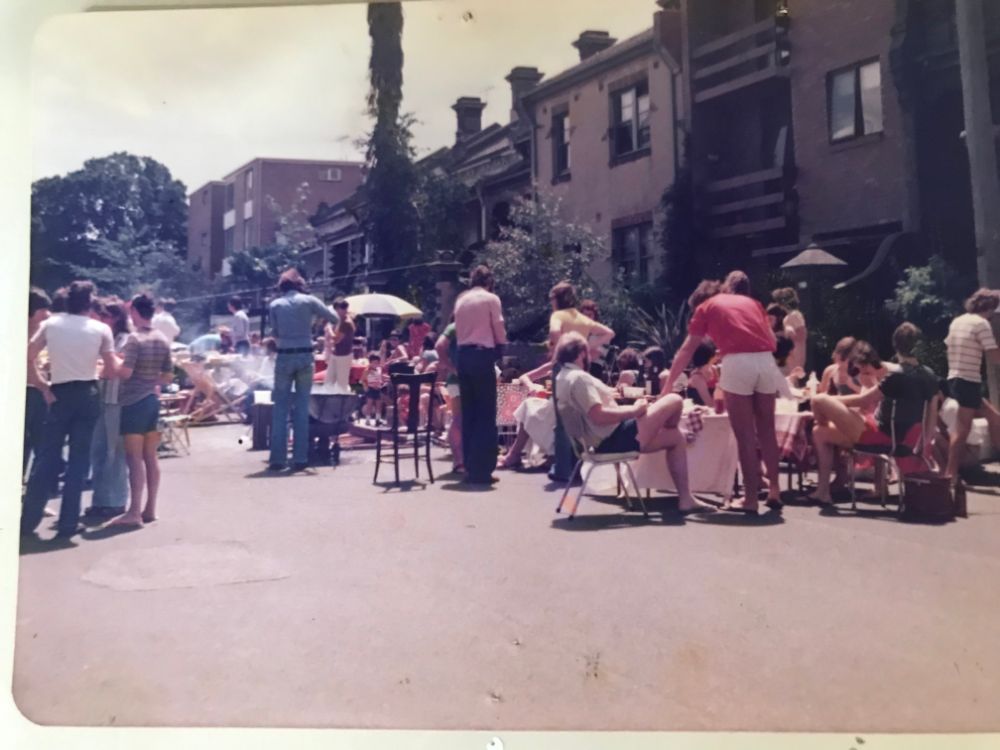 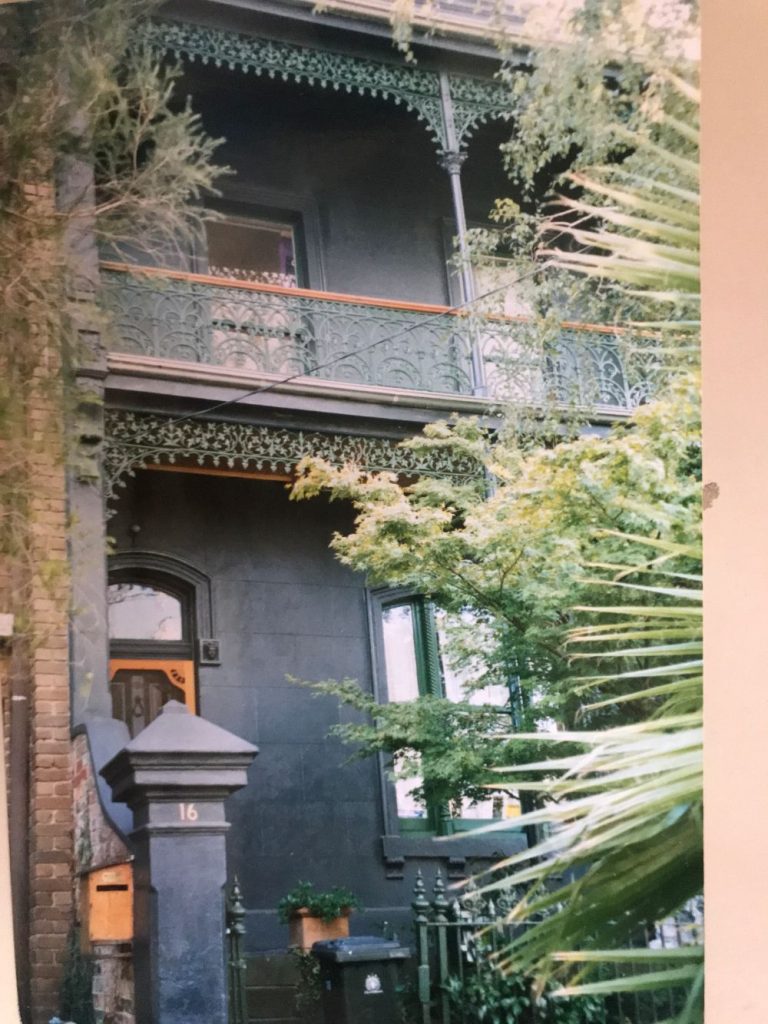 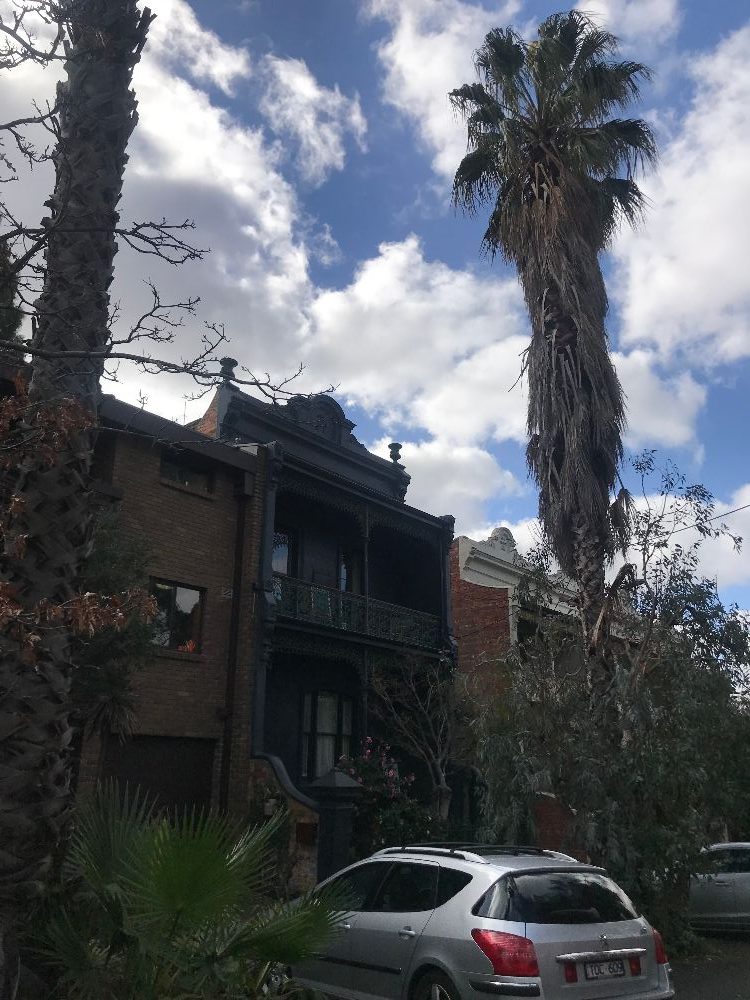 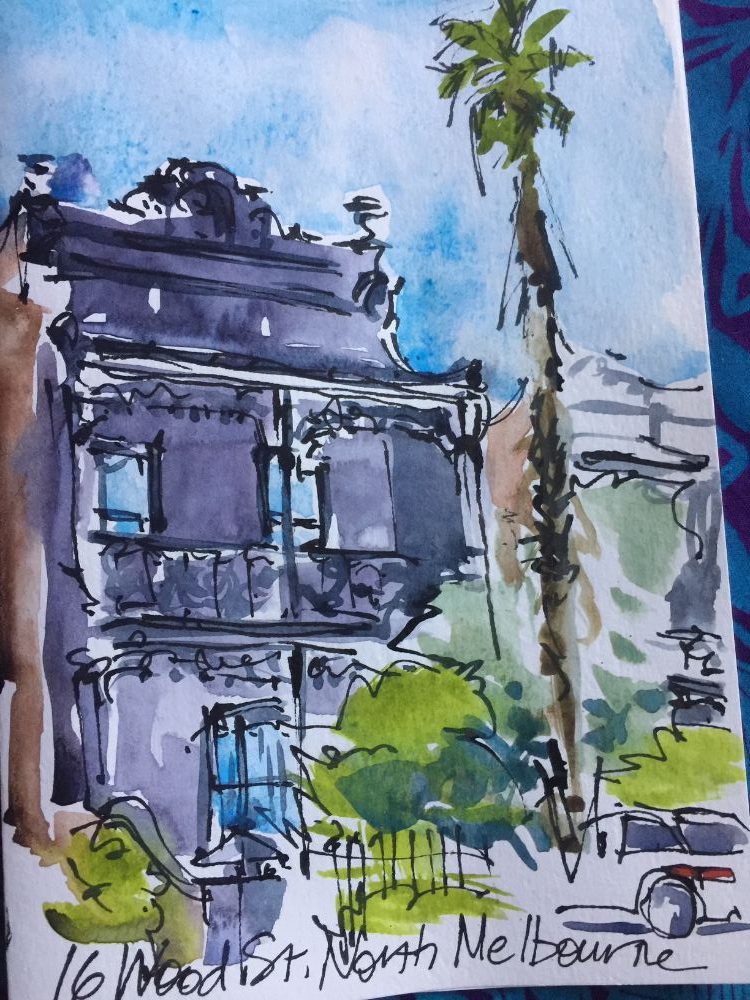 The first is detail for Wood Street from MMBW 1897 Melbourne Map. The second is detail of the Compiled Town Record Plan showing the allotments that were sold in December 1865 and January 1866. The third is detail of the MMBW Drainage Plan of showing houses, stables etc. All were supplied by Rob Oke. Note the separate land at the rear of 16 and 18 Wood Street which had a wooden two-storey horse stable covering the whole of the  land. 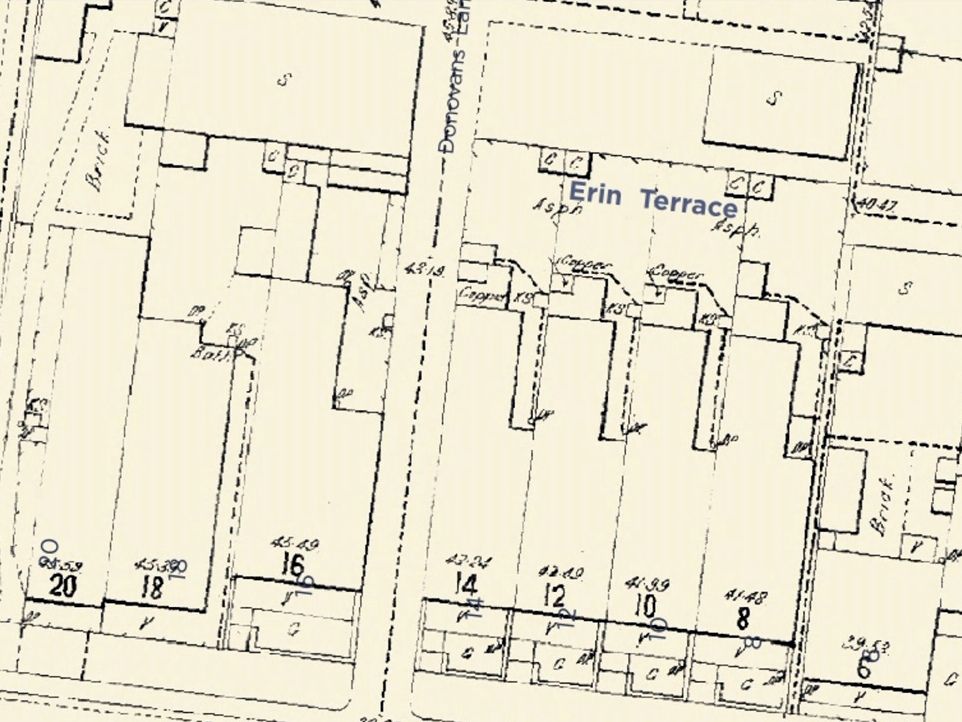 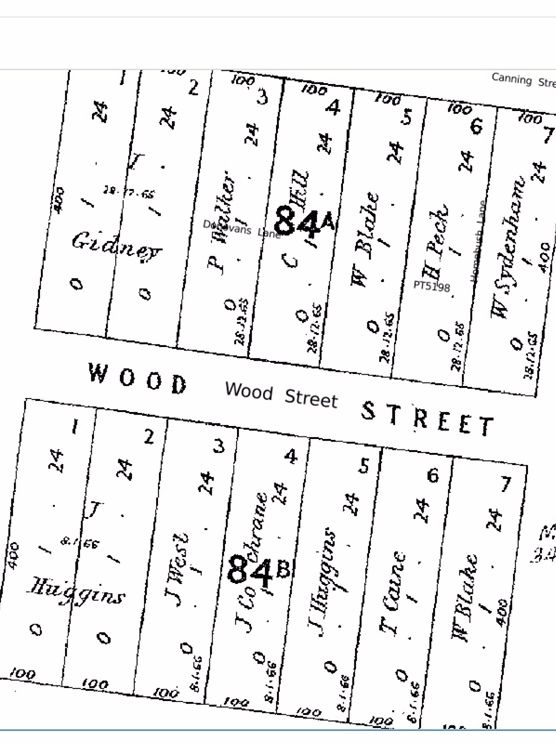 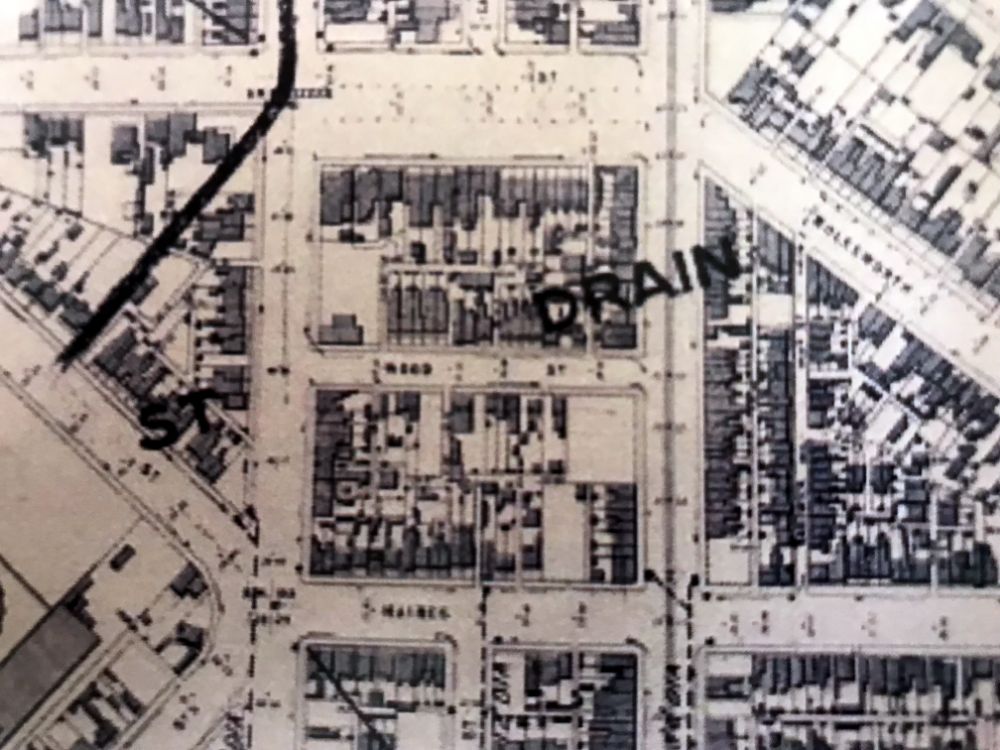 Originally there were an outdoor accessed shed/ laundry and a toilet and at the back of the block a wooden two-story horse stables paved with bluestone and wooden blocks. These stables covered the back of 18 Wood Street as well.

The house around 1968 was still  basically the original structure, but had a Repair Order on it and renovation was required to make it habitable. At this time the vestibule of the doorway to the backyard was situated off the hallway after the second room from the front. In the renovation/repair this was turned into a shower and internal  toilet. The third room which was the original kitchen became a dining room.  An opening was made to a new concrete floored  single story double-brick addition of a kitchen and laundry/toilet (incorporating a toilet near where the the original outdoor toilet had been). The backyard was now accessed from the new kitchen. A gas heater was installed where the original wood fired kitchen stove had been.

In the 1980s the kitchen was expanded and renovated to incorporate the laundry/toilet area with the toilet being removed. Cork tiles were  added as the floor covering. The north facing  rear wall now consisted of a full height glass window and glass sliding door. The original slate roof was replaced with second hand slate and the front verandah was replaced in the original style. Hydroponic heating was added. In around 2000 the kitchen was again renovated and the wooden floors in two ground floor rooms and the hallway were polished.

This property is part of the town allotment No 4 of 84A in North Melbourne and was surveyed in 1858, sold in 1865 and then sub-divided. William Donovan secured a title in 1871 – it was later to be No 16 Wood Street. At the time he owned and lived in a wooden house next door on land later to become 18 Wood Street. (This social item should be read in conjunction with Donovan`s story in the People section and the item on Wood Street in the Streets section).

In 1883 Donovan built the grand two-story house and named it Erin Terrace. It would have been connected to the newly available water and gas supplies. It would also have had sewerage pan collection.  There was a pathway from the side lane that went in front of the stables and allowed pan collection from both of Donovan`s houses.  The two-story horse stable behind the house also covered the rear of his next door property. This stable was accessed by the side lane which is now known as Donovans Lane. At some stage 18 Wood Street land covered by the stables was given a separate title and this title has always been owned by the owner of 16 Wood Street. The stable burnt down around 1960 when derelict and reportedly used by homeless people for shelter.

Donovan rented the newly built house to William Rushworthy for a year or so during which Donovan`s first wife Susan died. He soon married Annie Hamilton and they moved into the new house in 1885. His death and the departure of Annie and their children five years later is covered in the People story about Donovan.

The owners and residents are listed above. The owner selling in 1974 had purchased the house as an investment and had to first repair and renovate it. He complained at the settlement meeting that during the repair process whenever the building inspector visited he managed to find additional repairs that needed doing. This repair/renovation did nothing regarding the burnt down stable apart from clear the area. The Donovans Lane boundaries were not fenced, nor was the boundary with 18 Wood Street. The rear brick wall of the house continued to the side fence on Donovans Lane. This empty and unfenced site was a dumping ground for rubbish and building waste. When cleared a floor of bluestones and wooden blocks was uncovered along with a number of horseshoes. The area was fenced and reconnected to the main property in 1975.

The current owner has over the years had two former residents call by. One was the daughter of Mrs L McGregor and the other a German couple working briefly in Australia in the early seventies. And in May 2018 a 94 years old grand daughter of William and Annie Donovan visited on the 120th anniversary of Donovan`s death. 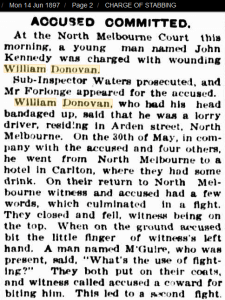 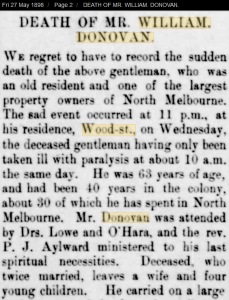 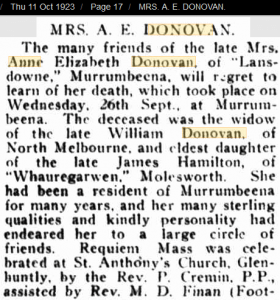