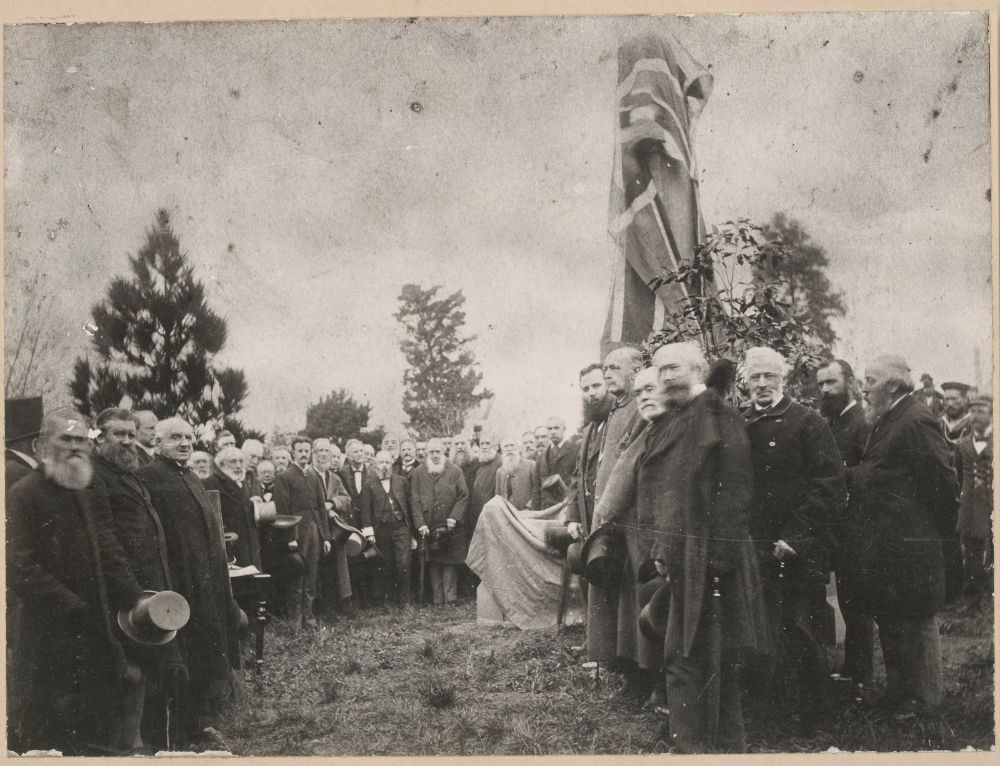 Monument erected to the memory of John Batman in the first Melbourne Cemetery.

This is the original Batman grave monument, arranged by J. J. Shillinglaw. It was erected by public subscription, in 1881, in the Old Melbourne Cemetery (now Queen Victoria Market). When the visible signs of the cemetery were removed, the monument was taken to Batman Avenue. A new monument was placed on Batman’s relocated grave at the Fawkner Cemetery (Pioneers section). The old monument was later returned to the Queen Victoria Market site on the Queens Street side, which is still it’s current location. In the photo is Austin Batman Weire, a grandson of John Batman, standing next to his father William Weire, Batman’s son-in-law who married Elizabeth Mary Batman. If I could, I’d point them out. (Contributor’s name: Parker, Steven)

The market sheds have been standing since 1878, it was built by James Thurgood & Co. for Melbourne Council.

While there has been considerable additions and phases of refurbishment over the years, the form of sheds A to E remain consistent to their 1878 construction with many original elements including timber posts, beams and corbels, iron trusses and bluestone footings. An article in The Argus on 21 March 1878 chronicled the market’s busy first day of trade:

“Three cheers were given for the Queen, and three for the mayor, and business then proceeded. There was an unusually large attendance of carts, the number being computed at about 600. As the pitching of three of the sheds had not been completed, only half the market could be occupied. About 300 vehicles were admitted, and remainder had to be provided for in the streets. All, however, appeared to do a good trade.”

The significant features of the market sheds are recognised in its heritage listing, including their open design, layout in regular row pattern flanked by laneways, and construction of post and beam system, with exposed triangulated trusses supporting a gabled roof (sheds A to E).

“The Queen Victoria Market is of architectural significance for its remarkably intact collection of purpose built nineteenth and early twentieth century market buildings, which demonstrate the largely utilitarian style adopted for historic marketplaces.”