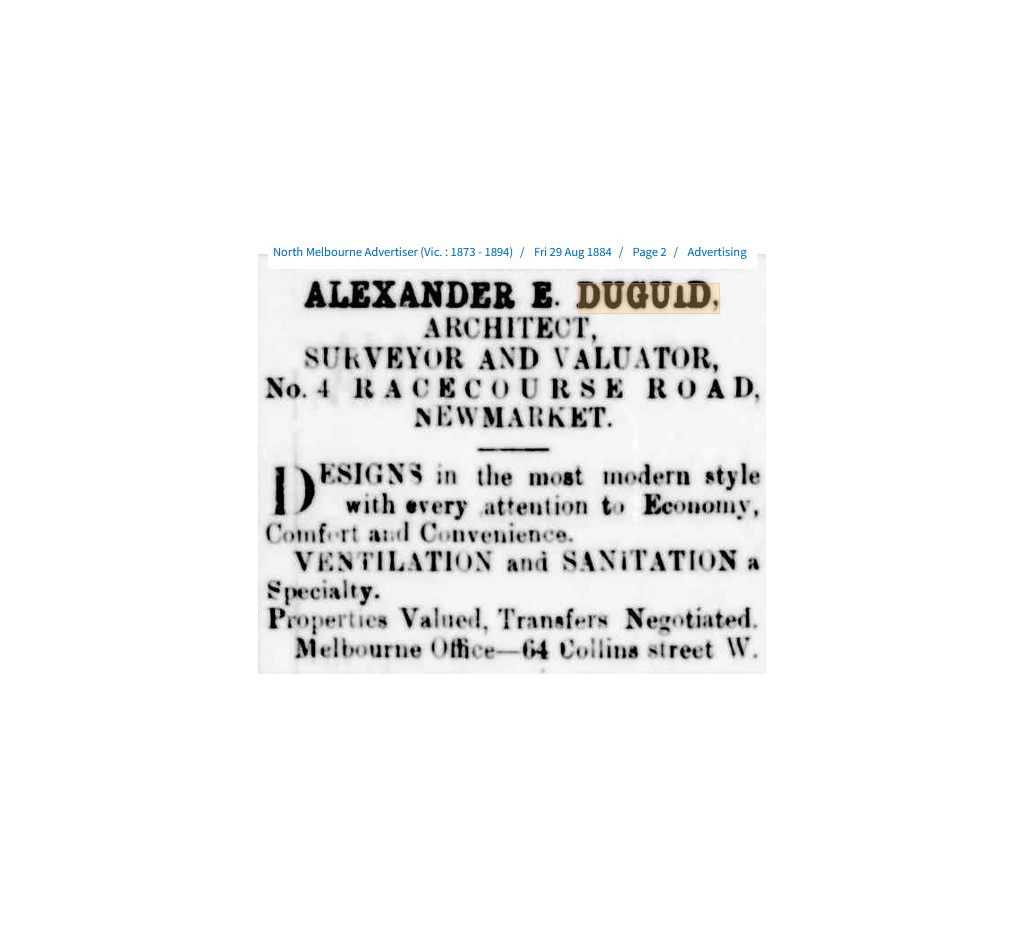 Born in 1850 at Boghead Aberdeenshire, Scotland to parents William Duguid and Jane Emslie. Married Jane Ann Smith Cattanach and had one child named Annie Cattanach Duguid. In the early 1880s Alexander studied at Aberdeen School of Art, receiving a full award in the elementary section in August 1881. He presumably continued classes until gaining a qualification in architecture (1).

A.E. Duguid had a significant body of architectural work prior to leaving the United Kingdom. http://www.scottisharchitects.org.uk/architect_full.php?id=200609

The Duguid family arrived in Melbourne in 1884.

His daughter Annie was educated Victoria Ladlies’ College ,Melbourne, Australia. She was keenly interested in politics, being one of the founders of the Women’s Unionist Assn. of South Africa. An active supporter of the Empire Movement promoted by Lord Meath and a worker for juvenile temperance. Rec. Elocution; Music; Gardening. She married George William Nelson, Optologist, Justice of the Peace, and Lord Mayor of Johannesburg from 1930-31. One Son – Francis Horatio Duguid Nelson.

Monaltrie, 1 Curzon Street, West Melbourne was built for engineer, George Small in 1888, this house was owned and occupied by him until his death in 1903. Architect, A.E. Duguid and builder, James Bailey were responsible for the creation of Monaltrie House. Duguid also designed the nearby significant Wesleyan Church and Hall at 23 and 23A Gladstone Street, Moonee Ponds in 1890 the imposing Corswell at 78 Holmes Road, Moonee Ponds (HO235); and Congregational Church, 62-74 McCracken Street, Kensington. See the list of Australian designed buildings below.

In 1897 the Duguid’s left Melbourne following the 1890’s collapse of the Melbourne property market and made their way to South Africa where Alexander continued his architectural work until his death in 1916.