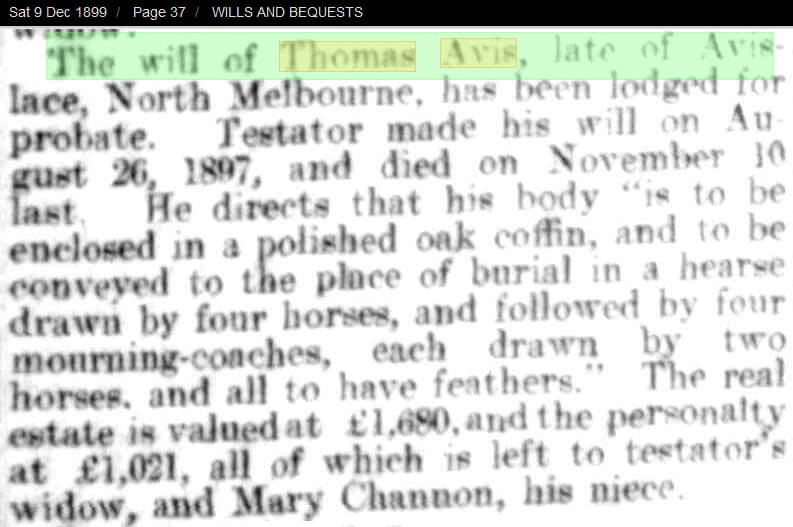 In 1864 Thomas Avis set up as a cabiniet-maker on the corner of Arden Street, straight across Errol Street from the Limerick Castle Hotel (licensed about 1866). The next year he added ironmongery to his business.

Evidently he did well; for in 1877 we find him giving his name to a Terrace of six dwellings in Chapman Street. He registered his address as “6 Rara Avis Terrace, Chapman Street”. Whether he was joking or boasting, no one can say. But — shades of Horace, the Latin poet who coined the phrase — “Rara Avis” –in a satire some years B.C., and of Persius and Juvenal who used the phrase in their satires many years later!

By 1890 Thomas Avis’ address appears as “Avis Place, off Chapman Street”. This is “Bedford Villa” which sou stands at the left hand top corner of the lane and is well cared for. The Avis family lived there until the turn of the century.

“Avis Terrace” lies between two rights of way both ‘leading into an open space, which gives access to the back entrances of houses in Flemington Road and Glendalough Terrace in Abbotsford Street.

Miss Davidson, 420 Dryburgh Street, remembers the! Avis family and the days when this open space was filled with washing hanging out to dry. It is now used as a car-park.(1)