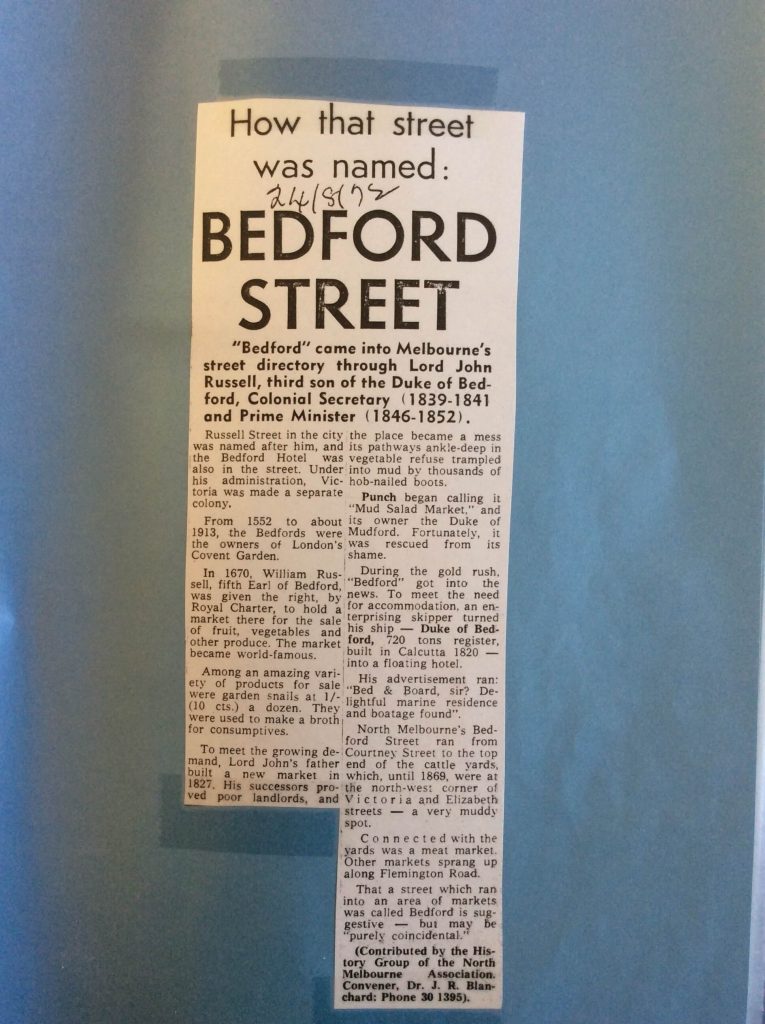 It came into Melbourne’s street directory through Lord John Russell, third son of the Duke of Bedford, Colonial Secretary (1839-1841 and Prime Minister (1846-1852).

Russell Street in the city was named after him, and the Bedford Hotel was also in the street. Under his administration, Victoria was made a separate colony.

From 1552 to about 1913, the Bedfords were the owners of London’s Covent Garden.

In 1670, William Russell, fifth Earl of Bedford, was given the right, by Royal Charter, to hold a market there for the sale of fruit, vegetables and other produce. The market became world-famous.

Among an amazing variety of products for sale were garden snails at 1/- (10 cts.) a dozen. They were used to make a broth, for consumptives.

To meet the growing demand, Lord John’s father built a new market in 1827. His successors proved poor landlords, and the place became a mess its pathways ankle-deep in vegetable refuse trampled into mud by thousands of hob-nailed boots.

Punch began calling it “Mud Salad Market.” and its owner the Duke of Mudford. Fortunately, it was rescued from its shame.

During the gold rush, “Bedford” got into the news. To meet the need for accommodation. an enterprising skipper turned his ship — Duke of Bedford, 720 tons register, built in Calcutta 1820 —into a floating hotel.

North Melbourne’s Bed-ford Street ran from Courtney Street to the top end of the cattle yards, which, until 1869, were at the north-west corner of and Victoria and Elizabeth streets — a very muddy spot.

Connected with the yards was a meat market. Other markets sprang up along Flemington Road.

That a street which ran into an area of markets was called Bedford is suggestive — but may be “purely coincidental.”(1)