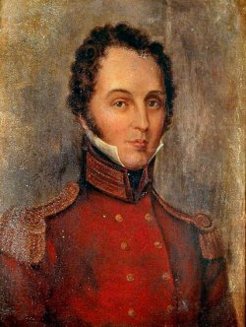 Bourke, an Irish-born British Army officer served as the 8th Governor of New South Wales from 1831 to 1837.

As a lifelong Whig (Liberal), he encouraged the emancipation of convicts and helped bring forward the ending of penal transportation to Australia.

In this, he faced strong opposition from the military/conservative establishment and its press.

He approved a new settlement on the Yarra River, and named it Melbourne, in honour of the incumbent British Prime Minister, Lord Melbourne.(1)

Bourke learnt in 1835 that squatters were crossing from Van Diemen’s Land to Port Phillip and claimed to have a treaty with the Aboriginals, he pressed for the establishment of areas of permanent settlement there, arguing that much evil might be averted by the early introduction of official control.

Meanwhile, to protect crown rights, he issued a proclamation declaring that the agreement with the Aboriginals was void, and the squatters were intruders.

The Colonial Office acceded to Bourke’s request and gave him wide discretion in the form of government to be established. Bourke acted at once. In September 1836 he sent Captain William Lonsdale to Port Phillip to act as police magistrate, military commander, head of the civil administration, and protector of Aborigines.

Foundations were thus laid for rapid but orderly development of the Port Phillip District. Bourke himself visited it in 1837, had a plan of streets drawn up, and ordered the first hundred building lots to be measured and offered for sale.

‘I have had the pleasure of affixing Whig names in the Bush’, he wrote to his son, ‘Melbourne is a beautiful site for a Town and there will soon be a very pretty one erected’.(2)