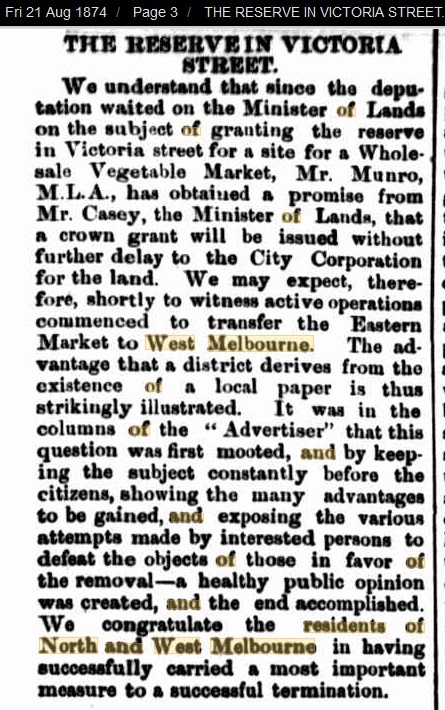 THE RESERVE IN VICTORIA STREET. We understand that since the deputation waited on the Minister of Lands on the subject of granting the reserve in Victoria street for a site for a Wholesale Vegetable Market, Mr. Munro, M.L.A., has obtained a promise from Mr. Casey, the Minister of Lands, that a crown grant will be issued without further delay to the City Corporation for the land. We may expect, therefore, shortly to witness active operations commenced to transfer the Eastern Market to West Melbourne. The advantage that a district derives from the existence of a local paper is thus strikingly illustrated. It was in the columns of the “Advertiser” that this question was first mooted, and by keeping the subject constantly before the citizens, showing the many advantages to be gained, and exposing the various attempts made by interested persons to defeat the objects of those in favor of the removal-a healthy public opinion was created, and the end accomplished. We congratulate the residents of North and West Melbourne in having successfully carried a most important measure to a successful termination.(1) Source. (1) North Melbourne Advertiser 21/8/1874