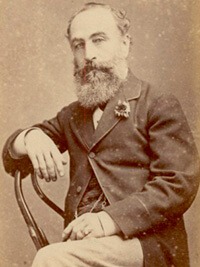 (1)
Charles Ager Atkin, “chymist” — as then spelt, arrived in Melbourne in September 1853, from Nottingham England, at the age of 25.

He came to try his luck on the goldfields, but an accident on board ship prevented this.

In March 1854 he set up as a “chymist” in Errol Street North Melbourne.

His small garden of rare plants, and the antics of a pet monkey he kept on a pole at the shop attracted many customers.

His pharmacy is still there, now owned by W. H. Wallace.

Atkin became famous for his Quinine Wine Tonic, which won medals at various exhibitions, and sold at the rate of 3000 gallons a year in the State and beyond.

The first wine used was made from grapes grown by his father at their other “chymist’s” shop at 96 Spencer Street. Later, the wine came mainly from Rutherglen.

Until 1945, 24 Atkin Street North Melbourne was a storage depot for the tonic.

Typical of the fantastic lengths to which they had to go to compete is an item from the (North Melbourne Advertiser, September 1883), headed “The Brazen Serpent.”

It reads: “Like the brazen serpent the great Jewish leader lifted high in the sight of the perishing followers whereby they were saved from death, the discoverers of Hop Bitters have placed before suffering, ailing mankind a remedy which enables them to fight with conquering advantages.”

Atkin’s tonic is still available. Hop Bitters is not. Fish culture being his hobby, Atkin bred goldfish in a pool in his garden. He pioneered the aquarium as a drawing-room ornament, and published a pamphlet on how to care for fish.

He was prominent, however, in the social life of the community and in every effort made for its good. Among many interests he was vice-president of the Hotham Cricket Club, and played a leading part in having “permissive occupancy” of the recreation reserve — then Crown Land — that changed into “permanent ownership.”

It is now the North Melbourne football ground.(2)