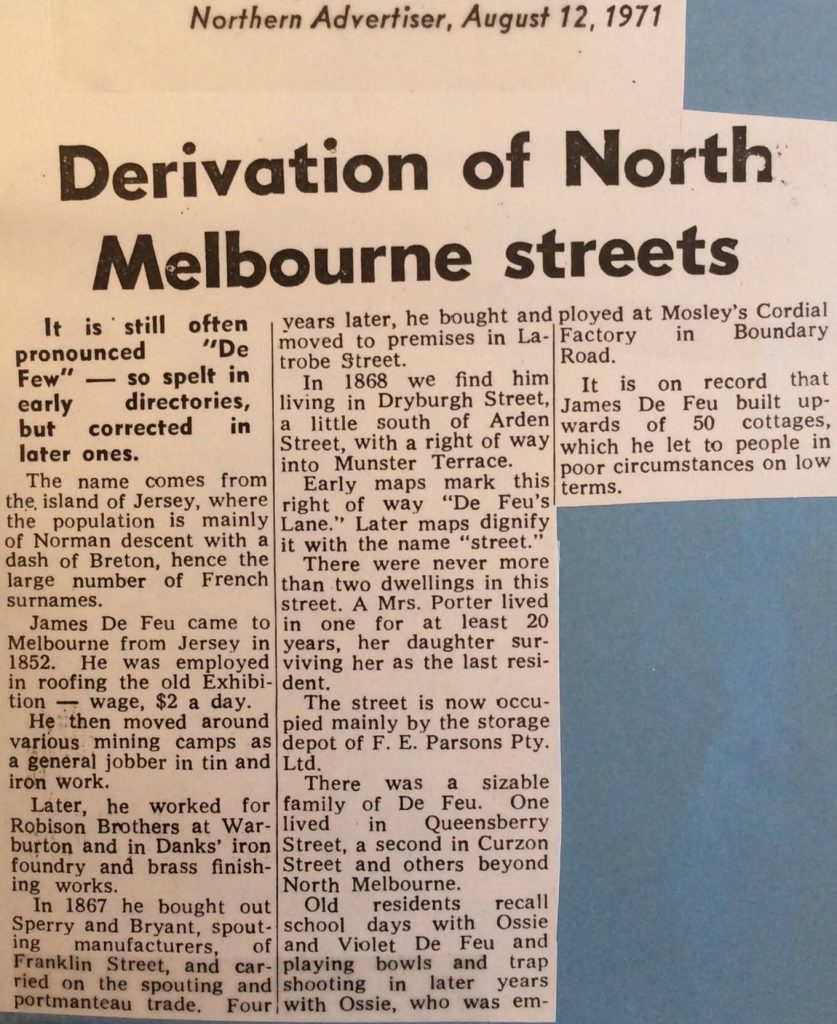 It is still often pronounced “De Few” so spelt in early directories, but corrected in later ones.

The name comes from the, island of Jersey, where the population is mainly of Norman descent with a dash of Breton, hence the large number of French surnames.

James De Feu came to Melbourne from Jersey in 1852. He was employed in roofing the old Exhibition, wage, $2 a day. He then moved around various mining camps as a general jobber in tin and iron work. Later, he worked for Robison Brothers at Warburton and in Danks’ iron foundry and brass finishing works.

In 1867 he bought out Sperry and Bryant, spouting manufacturers, of Franklin Street, and carried on the spouting and portmanteau trade. Four years later, he bought and moved to premises in Latrobe Street.

In 1868 we find him living in Dryburgh Street, a little south of Arden Street, with a right of way into Munster Terrace.

Early maps mark this right of way “De Feu’s Lane.” Later maps dignify it with the name “street.” There were never more than two dwellings in this street. A Mrs. Porter lived in one for at least 20 years, her daughter surviving her as the last resident. The street is now occupied mainly by the storage depot of F. E. Parsons Pty. Ltd.

There was a sizable family of De Feu. One lived in Queensberry Street, a second in Curzon Street and others beyond North Melbourne.

Old residents recall school days with Ossie and Violet De Feu and playing bowls and trap shooting in later years with Ossie, who was employed at Mosley’s Cordial Factory in Boundary Road.

It is on record that James De Feu built up-wards of 50 cottages, which he let to people in poor circumstances on low terms.(1)