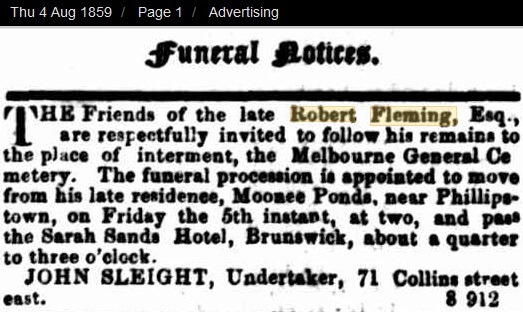 Robert Fleming was born in 1804 in Edinburgh, Scotland to parents Thomas and Janet Fleming.

Robert and his wife sailed on board the ship Dunmmore and arrived in Hobart early in 1831 (1) with child. Robert resigned from the Tasmanian Police Force 19th April 1836. (2) The Fleming’s lived in the Launceston area of Tasmania and had 3 more children before they left Tasmania and came to Melbourne around 1836/7.

Robert and Janet Fleming gave birth to their next child at Campbellfield just north of Melbourne in 1837 and an additional 5 more children afterwards as they settled in the new colony. Robert Fleming was a paid subscriber to the Scots Church of Melbourne in 1841.(3)

Robert “Bob” Fleming, one of the first colonists, seeing that there was sufficient of the Flat available for grazing, fattening and slaughtering stock, settled down there and began the business of retailing meat for the early Melbournian’s table.

As a compliment to this pioneer butcher, the hamlet and the road leading to it were called “Flemington”. It was only some years later that the name was extended to the racecourse.(4)

Robert Fleming is buried with wife Janet, both of whom were early settlers along with their infant children Elizabeth, James and Charles at Melbourne General Cemetery, Presbyterian Section, H 188.