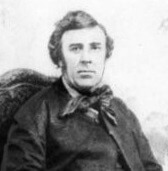 He came from Northern Ireland in 1841 and began farming at Merri Creek on the northern outskirts of Melbourne.

As this did not suit his restless energy, he opened a business in Lonsdale Street. Speculating in land and property, he soon became wealthy.

In the 1850s, he built “Flemington House” as his home. A palatial edifice, with landscaped gardens, an artificial lake with white swans, tanks of exotic fish, and aviaries of brilliant birds, it cost him $120,000.

It has all gone. “Travancore” — the home for mentally disturbed children — now stands in its place.

Like most land-seekers, Glass used “dummies”, at one time 300 of them, to get hold of land. By 1862, he was lessee of over a million acres in Victoria and large holdings in New South Wales.

“The greatest squatter in the colony,” he was reputed a millionaire and was well-known as a most generous benefactor.

Graft was so rife in those days that The Ballarat Star said “such conduct had come to be accepted, save by a few, as the norm.” Glass was involved. The Leader publicly accused him of “graft in high places.” His operations in this regard were “the talk of Collins Street.” At last, Parliament had to act. It brought Glass before the Bar of the House and sent him to the common goal. There was a public uproar, and under a writ of Habeas Corpus, the Supreme Court released him.

Parliament heatedly debated this intrusion on its privilege, but fear of rioting by the cheering crowds that had packed the court and thronged the streets closed the debate.

Glass has shown such marks of greatness and so much kindness to so many that the ‘vox populi’ was against his being made a scapegoat. By this time, Glass was ruined.

He had gambled on a lease of three million acres in New South Wales, but drought and a fall in the price of wool dealt him heavy blows.

He won universal admiration for the heroic efforts he made to satisfy his creditors. When a fatal disease struck him, however, he could struggle no longer.

For a man of his temperament and courage,” wrote Margaret Kiddle,” there was one way to meet the ultimate defeat. His hand was steady as he drank the hydrate of chloral.” North Melbourne kept its street-name.(1)