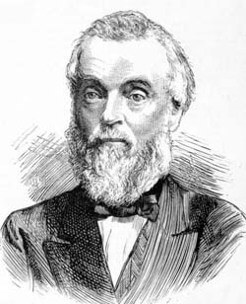 George Harker was born at Pateley Bridge, Yorkshire. Trained as a chemist, he was dispenser to a surgeon in Leeds for a while, and then set up his own pharmacy in Prescot near Liverpool, where he was also treasurer of the Anti-Corn-Law League.

He gave up farming to join his brother Thomas in a grain and produce business in Melbourne. He did so well that by 1856 he was able to leave the business and devote himself to public work.

Collingwood elected him to the first Legislative Assembly (1856), and he was Treasurer in the 1858-59 ministry.

He followed an independent course in politics, voting Liberal at one time and Conservative at another. The results was that he was in and out Parliament, Collingwood sending him back twice.

Harker was violently opposed to State aid to religion, protection and to the latter involving him in many sectarian squabbles. He worked hard, but without success, for the payment of members. He served on several Royal Commissions and was a member of the Board of Education.

Harker was active in promoting and developing local companies, one being the Collingwood Gas Company. He had many interests in mining, railways and banking.

He had a deep concern for the distressed and afflicted, and was a founder of the Victorian Asylum and School for the Blind (1866) and its President and chair-man to the day of his death in 1879.

He was chairman and treasurer of the Benevolent Asylum — the first building erected in North Melbourne — for six years. He was also a member of the Committee of Management of the Melbourne Hospital.

Harker was a generous contributor to the funds of the Congregational Church, a regular attender, but, for reasons of conscience, never a member.