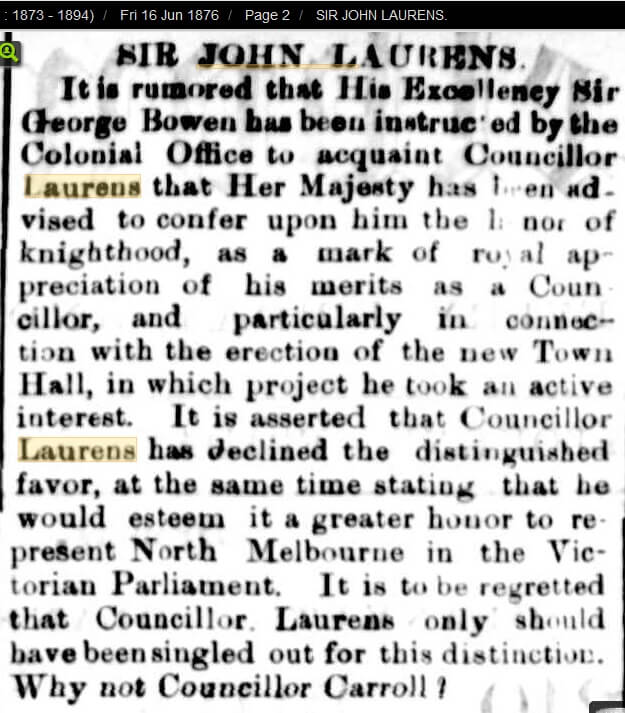 A blacksmith by trade, he brought with him a pre-fabricated store-cum-dwelling.

Six weeks after landing, he opened a grocery in Spencer Street West.

Early in 1865, he made his home in Hotham and lived at Laurens’ house, 407 Dryburgh Street North Melbourne. Five years later, he was on the council, which he served for 18 years, twice as Mayor.

In 1877, he won a seat in the Legislative Assembly, which he held until 1892, when he was defeated by the Labor candidate.

In politics, Laurens was a Liberal, veering left of center and an ardent protectionist.

Tireless in all he put his hand to, he persistently attacked the management of the Victorian Railways under the Gillies regime and hammered the Government for years to reclaim the swamp which pollution had made a grave danger to the health of the people in West and North Melbourne.

When the Hotham Recreation Reserve was threatened, he protested that the Government had already made £25,000 ($50,000) at the expense of the people’s amenities.

Name Change
Prompted by the example of Emerald Hill, which had become South Melbourne, Laurens was largely instrumental in having the name of Hotham changed to North Melbourne. At no small cost to himself he vigorously campaigned against annexation to the city council.

Laurens probed any matter he took up in minutest detail; but was not skillful in using his data. His speeches were so lengthy, tedious and discursive that, very often, the wood of his argument was hidden by the trees.

But his sincerity was never questioned or his courtesy faulted.(1)

That’s why North and West Melbourne both have Laurens Street.

It is rumored that His Excellency Sir George Bowen has been instructed by the Colonial Office to to acquaint Councillor Laurens that Her Majesty has been advised to confer upon him the honor of knighthood, as a mark of royal appreciation of his merits as a Councillor, and particularly in connection with the erection of the new Town Hall, in which project he took an active interest. It is asserted that Councillor Laurens has declined the distinguished favor, at the same nine stating that he would esteem it a greater honor to represent North Melbourne in the Victorian Parliament. It is to be regretted that Councilor Laurens only singled out for this distinction. Why not Councillor Carroll? (2)