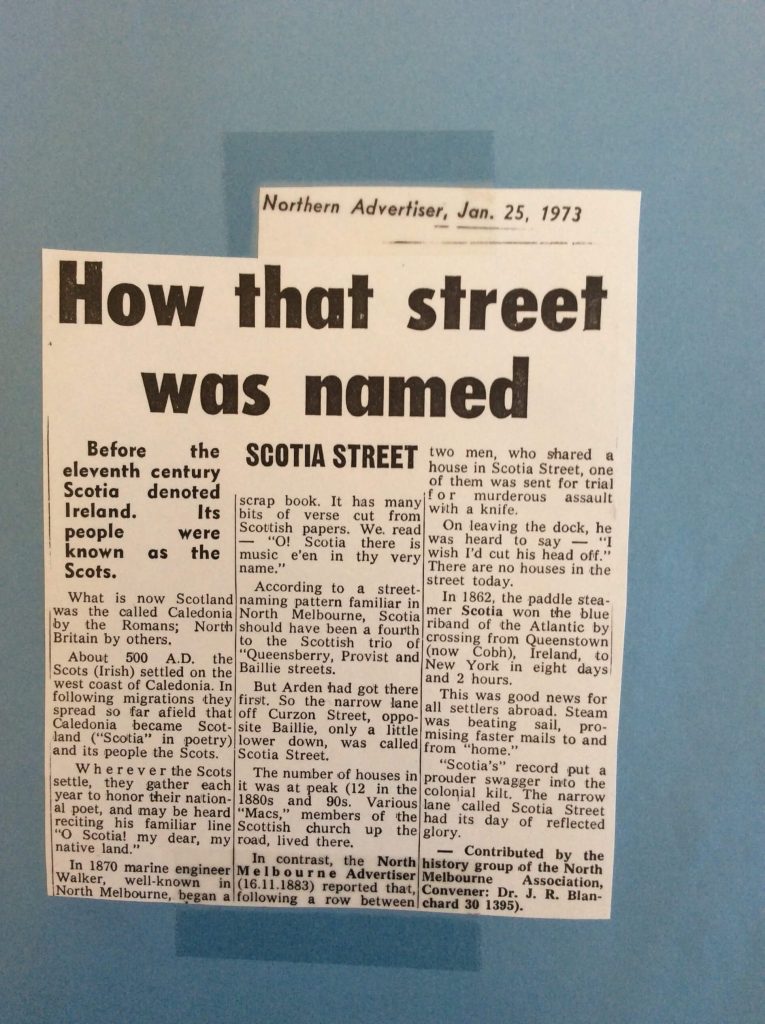 Before the eleventh century Scotia denoted Ireland. Its people were known as the Scots.

What is now Scotland was the called Caledonia by the Romans; North Britain by others.

About 500 A.D. the Scots (Irish) settled on the west coast of Caledonia. In following migrations they spread so far afield that Caledonia became Scotland (“Scotia” in poetry) and its people the Scots.

Wherever the Scots settle, they gather each year to honor their national poet, and may be heard reciting his familiar line “O Scotia! my dear, my native land.”

In 1870 marine engineer Walker, well-known in North Melbourne, began a scrap book. It has many bits of verse cut from Scottish papers.

According to a street-naming pattern familiar in North Melbourne, Scotia should have been a fourth to the Scottish trio of “Queensberry, Provist and Baillie streets.

But Arden had got there first. So the narrow lane off Curzon Street, opposite Baillie, only a little lower down, was called Scotia Street.

The number of houses located there at it’s peak was 12 in the 1880s and 90s. Various “Macs,” members of the Scottish church up the road, lived there in Scotia Street.

In contrast, the North Melbourne Advertiser (16/11/1883) reported that, following a row between two men, who shared a house in Scotia Street, one of them was sent for trial for murderous assault with a knife.

Sadly there are no houses in Scotia Street today.

In 1862, the paddle steamer Scotia won the blue ribbon of the Atlantic by crossing from Queenstown (now Cobh), Ireland, to New York in eight days and 2 hours.

This was good news for all settlers abroad. Steam was beating sail, promising faster mails to and from “home.”

“Scotia’s” record put a prouder swagger into the colonial kilt.

The narrow lane called Scotia Street in North Melbourne can have its day of reflected glory.(1)