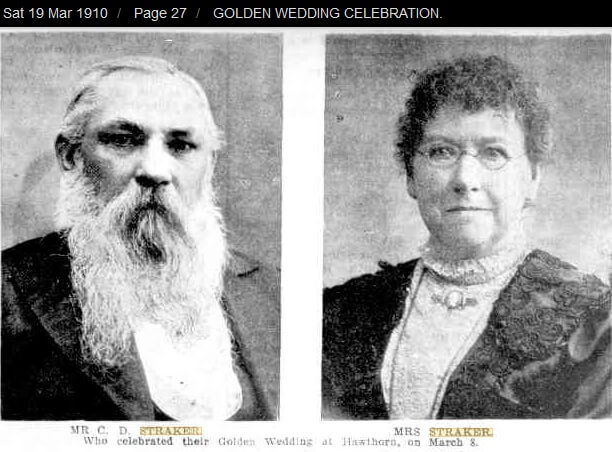 (1)
Charles Doyl Straker came to Melbourne, in January 1856, and set up as a butcher. Ten years later, he took over the Parkside Hotel, on the corner of Flemington Road and Villiers Street North Melbourne, adding catering to hotel-keeping.

Five years later — he became lessee of the Three Crowns Hotel, in Victoria Street West Melbourne, and soon afterwards bought the freehold. He continued as caterer as well as hotelier.

Three Crowns as a hotel name came from Britain, where there are at least 10 pubs of that name in Staffordshire alone, and others in London.

The name was a favorite for inns in the Middle Ages, representing the three “kings” led by a star to Bethlehem.

These were also known as the Three Kings of Cologne.

Legend has it that the Empress Helena brought their bones to Constantinople. They were removed later to Milan, and thence to Cologne, which city still has three crowns in its arms.

Cologne merchants, who did a big linen business in England , took three crowns as their sign, and this made them more popular still as the name for a pub.

In the days when a five shilling (50 cent) piece was called a “crown”, a wit in Buckinghamshire put up “15/-” (fifteen shillings) as the name of his inn — a play on Three Crowns.

Here Straker grew to be the largest caterer in Victoria, boasting that he could provide for 4000 persons at 24 hours’ notice.

In his North Melbourne days, Straker was president of the Hotham Social and Dramatic Club, which staged a weekly play to full houses in the United Friendly Society’s Hall, on the North side of Queensberry Street between Chetwynd and Leveson streets.

The North Melbourne Advertiser (August 20, 1883) reports that he catered for the first annual ball of the Hotham Master Butchers’ Association, when 80 couples took the floor in the Errol Street town hall.(2)

Obituary.
Charles Doyle Straker, one of best known caterers and hotel-keepers in Melbourne, died on Saturday morning at the age of 74 years.(4)