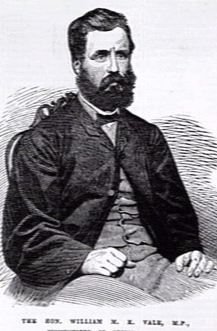 William Mountford Kinsey Vale came to Victorian from London in March, 1853. After working on various goldfields, he settled in Ballarat as a newsagent bookseller.

A handsome man, with boundless and vivacious energy, a ringing mellow voice, and a fluent command of words, he quickly came to the front as a lay preacher of the Congregational Church, a staunch and voluble democrat, and an open-air orator for temperance and other social questions.

Ballarat West sent him to Parliament in 1865, where he soon rose to ministerial rank.

The scandal that broke in 1868 and Vale’s reaction to it put him in the limelight. C. E. Jones, Minister for Railways, was expelled from the House for bribery and corruption.

He sought re-election from Ballarat West. When it seemed that he would be returned unopposed, Vale, who was Minister for Customs, resigned his seat to oppose him.

He lost the election by 559 votes, but won greater respect than ever from all who put integrity above success.

In 1874 Vale went to England on a board of advice to the Agent-General. While there he qualified as a barrister, and on returning was admitted to the Victorian Bar.

He shared a room with Alfred Deakin in Temple Court and later in Selborne Chambers. Of this association Deakin wrote: “It led to my beginning a political career at a time and in a direction which otherwise I should never have essayed . . . and with notable results.”

He had the strength and weaknesses of a strict Puritan in life and ideals. He made few friends and many enemies – but he commanded respect for his ability, his unswerving loyalty to principle and, in an age when abuse was the vogue in controversy, for his slashing tongue.(2)

Obituary.
Mr William Mountford Kinsey Vale, a gentleman who figured prominently in the earlier political struggles of Victoria, though for some years past, owing to declining health, he had been obliged to wholly disassociate himself from political work, whose illness arose from Bright’s disease of the kidneys, succumbed on Thursday at his residence, Church-street, Abbotsford, Victoria. The deceased gentleman, who was 62 years of age, was a native of London and came to Melbourne in 1853, when he was only 20 years of age.(3)