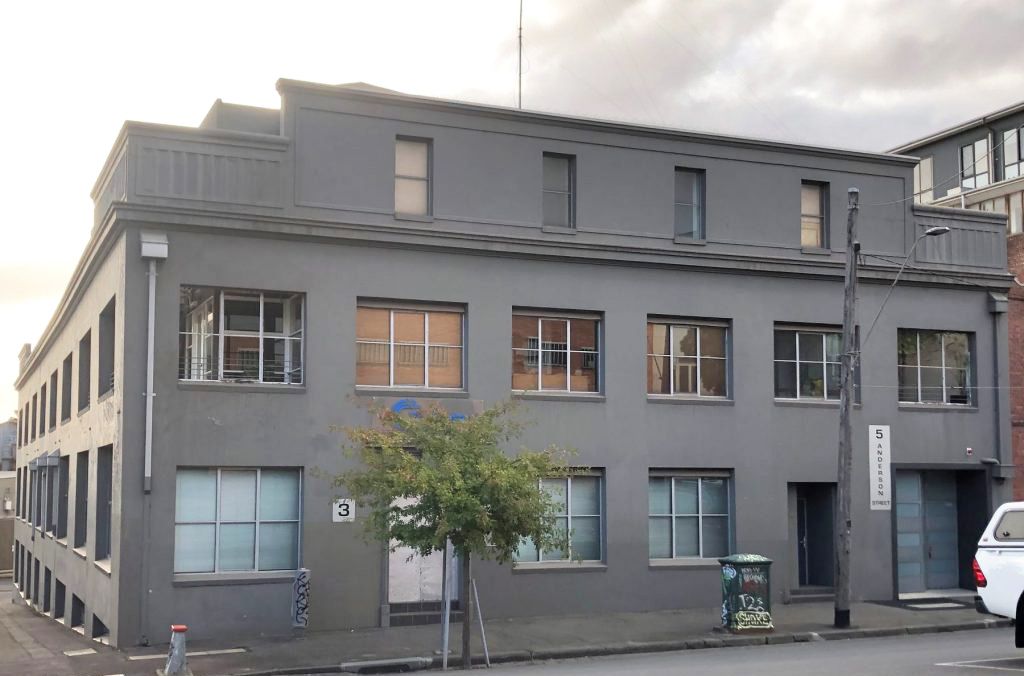 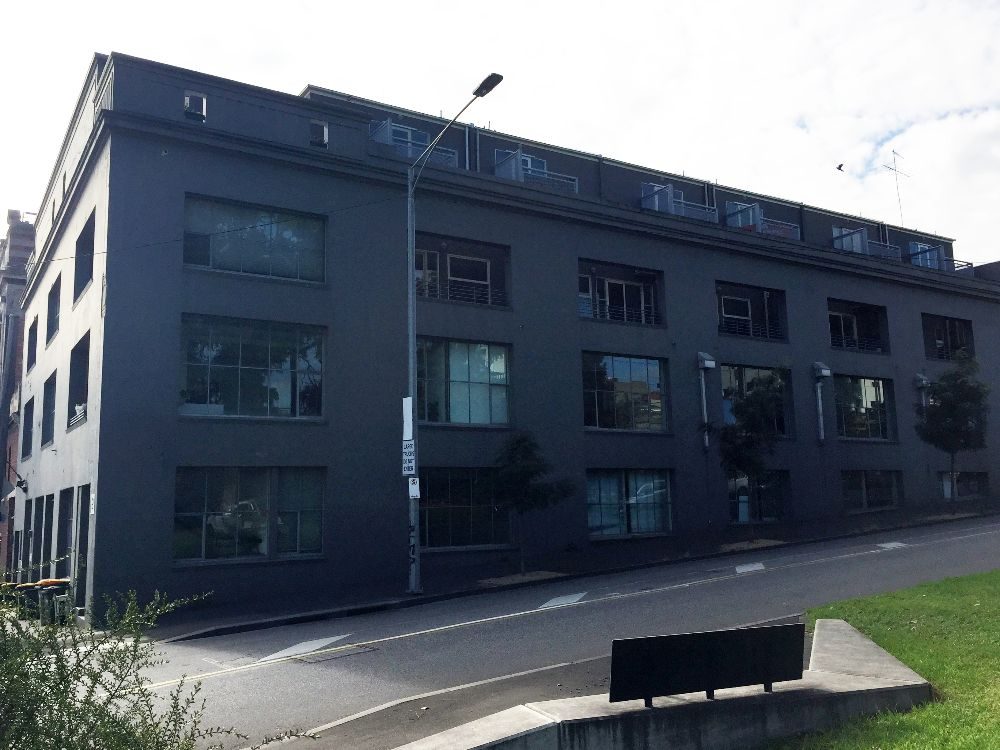 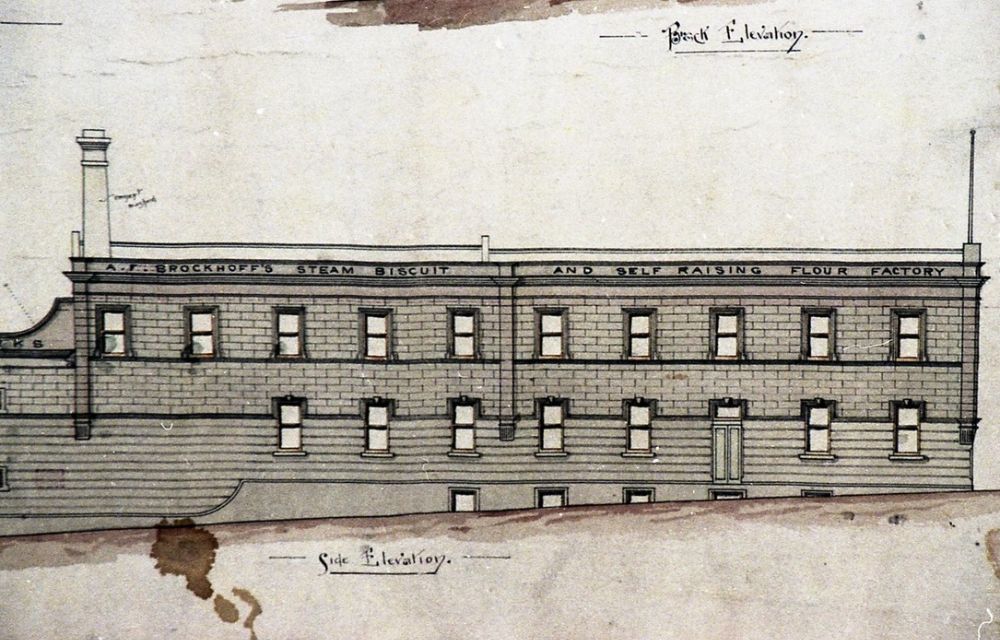 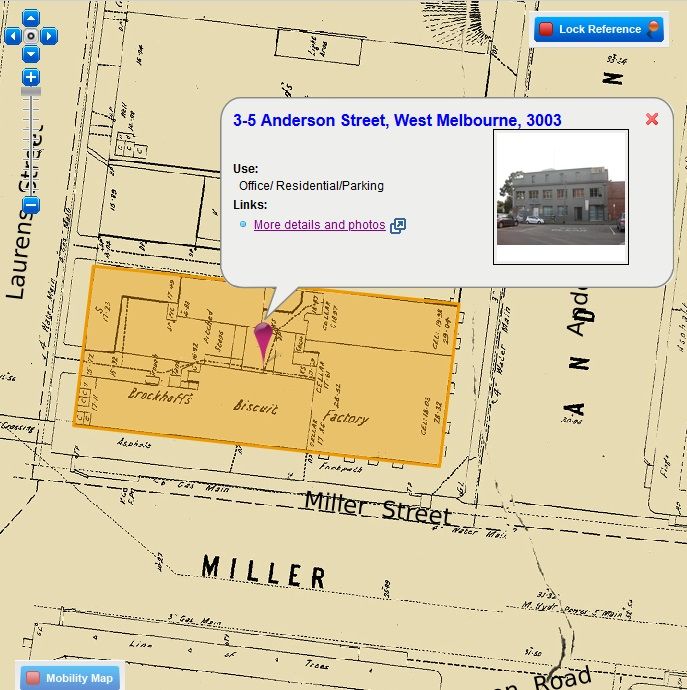 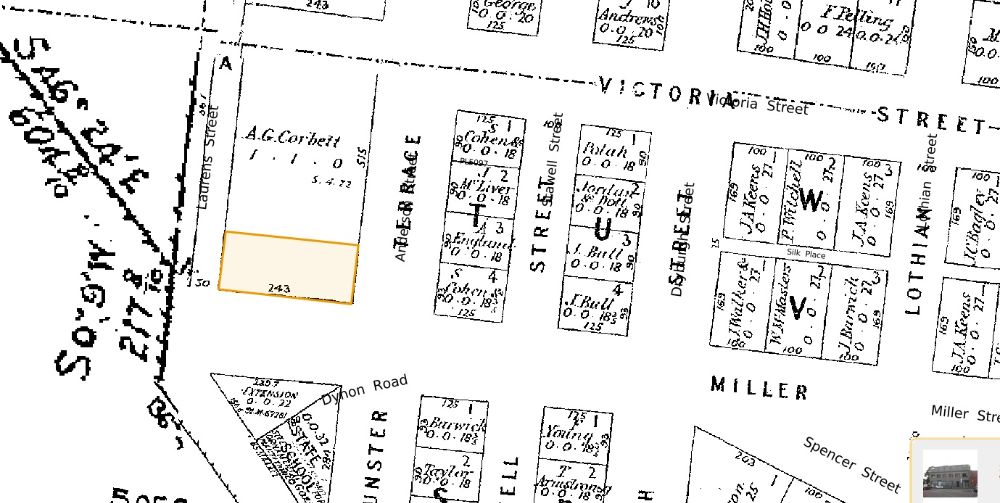 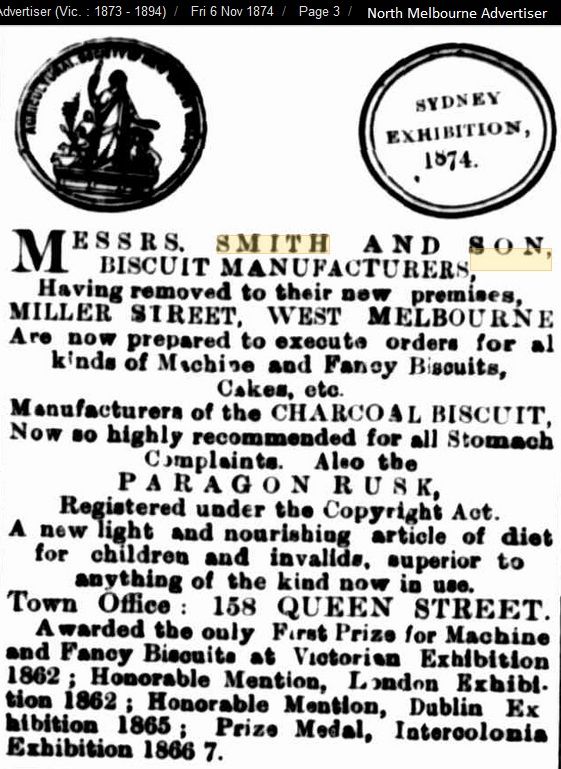 Other significant building works carried out by Murray & Hill can be found here.

Awarded the only first prize for machine and fancy biscuits at the Victorian Exhibition 1862.

Brockhoff’s Biscuits for all occasions. 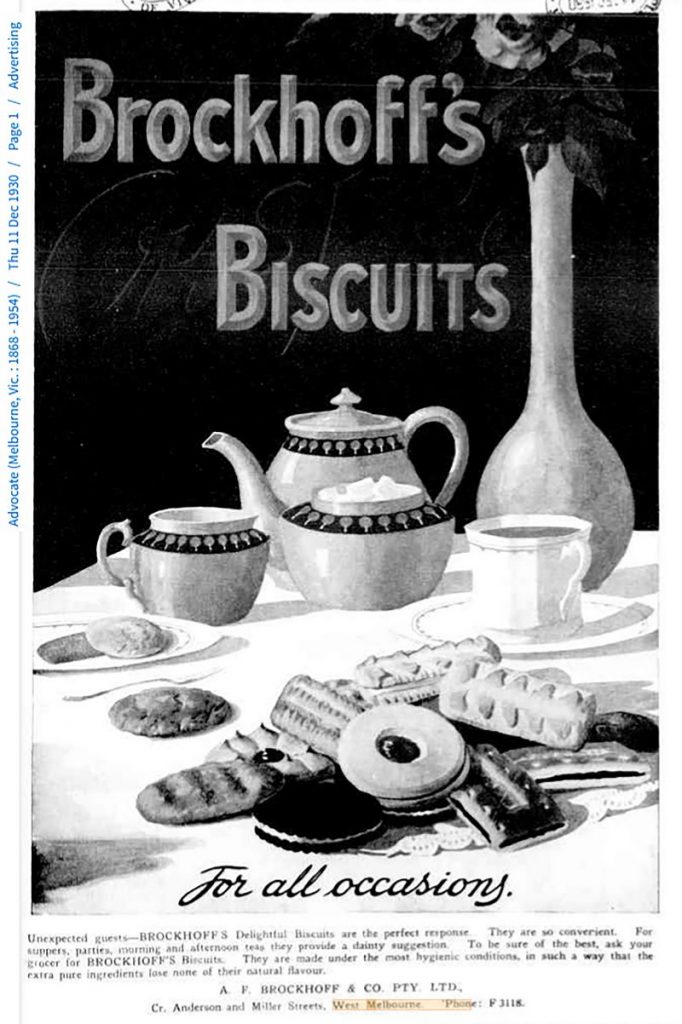 Messrs. McClure, Valantine and Co report having sold by private contract on account of Messrs Smith & Son, their extensive biscuit factory including machinery and plant situated at the corner of Miller and Anderson Streets West Melbourne to Messrs Stewart & Brockhoff at a satisfactory price.

Few industries introduced into the colony of late years have flourished more, or acquired a larger development than that of preparing, by almost automatic machinery, the endless varieties of biscuits which in these modem days are to be seen in numberless shops, cosily packed in neat glass-fronted tin canisters, and have completely superseded the simple “captain,” or the carraway-flavored “Abernethy,” that were the delights of our youth.

Of a verity those substantial and homely comestibles which erstwhile were munched with so much gusto would be apt to be despised as hard and indigestible — not to say gritty— by palates accustomed to the crisp, delicate and appetising emanations from the ovens of this our time.

The Messrs. Smith and Son, of Lonsdale-street Melbourne, having been amongst the first in the trade to introduce the modern improved machinery into their manufacture, have found their business extending so rapidly that it has become necessary to seek premises more commodious in themselves and presenting greater facilities for conducting the external parts of it.

They have accordingly chosen a piece of ground at North Melbourne in the immediate vicinity of the railway station, whereon they have put up a substantial brick structure of two stories, on a solid bluestone basement, having a frontage of 50 feet to Anderson-street by 140 feet to Miller-street, with a lofty cellar extending under the main building 60 feet by 50 feet.

This spacious subterranean apartment is likely to be of the greatest possible advantage in the conduct of the business, as it not only forms a capital place for the storage and washing of butter and similar commodities, but will offer a cool retreat for carrying on some of the processes of preparing the bread in the sultry weather that is coming.

The building has been faithfully executed by Messrs. Murray and Hill, of Victoria-street East Melbourne. The ten-horse horizontal engine by Duff and Co., of Glasgow, with its twelve-horse boiler, which supplies motive power to all the machinery, is also on this level, and the plan of carrying the shafting through the floor by-five belts from below has the noteworthy recommendation that it is quite out of the workmen’s way, and consequently infinitely less dangerous than the usual method of conveying it from drums overhead.

On the principal floor above are concentrated all the various machines for mixing, cutting, shaping and stamping the dough, and the oven for baking it. The first in order of these is the mixer, a huge iron basin, not unlike a Chilian mill in appearance and in action, in which an iron cylinder of some two feet in diameter, and weighing half a ton, revolves on its own axis, and at the same time travels round the periphery of the basin, thereby kneading the flour and water in a very few revolutions into a homogeneous mass, and throwing it, by means of a curved share, to the side, whence it is removed by the operator to a series of “breaking rollers,” where it is speedily pressed out into long smooth slabs of any required uniform thickness or density.

Fifty pounds of flour were, in our presence, thus manipulated in four minutes; by hand labor two hours would have been required to accomplish the same work. It then passes to the “finishing roller,” an instrument which Messrs. Smith were the first to introduce into Victoria.

This, as well as the other machines, was fabricated by Mr. James Barnes, of Barkly-street, Carlton, and is a highly ingenious piece of mechanism. It resembles somewhat a printing machine in appearance, having a series of endless canvas traversing belts, which carry the- prepared dough under the cutters that divide it into squares, rounds, or ovals, according to the sort of biscuit to be made, and stampers that impress the makers’ name upon them, and punch the little holes that serve to prevent its blistering.

There is an elastic india-rubber cushion under the web, so that the dough does not receive any undue pressure in the stamping process. The stamped biscuits are delivered by the revolving bands on to a tin tray, from which they are easily conveyed in a wooden frame on castors, holding several tins, to the oven.

This is an improved apparatus, consisting of a horizontal revolving iron drum of 13 feet diameter, having eight pans or trays of about 3-foot-wide fixed on its axis, in a similar position to the floats on a steamer’s paddle-wheel. On these the biscuits are arranged, and by the time the paricular tray has come round again to the furnace-mouth they are just sufficiently baked. It is known as Mackenzie’s Patent American Reel oven, and is heated by a furnace in the basement story beneath, which is lined, instead of fire-bricks or tiles, with a peculiar kind of steatite, or soap-stone, that has been first used here in this furnace.

It is a curious soft, soapy material, somewhat analogous to asbestos in many of its characteristics, but without its fibrous texture, very heavy, and possessing a singular metallic sheen that makes it very remarkable. A small quantity has been imported expressly from South Australia, where it has been found to answer better for similar purposes than any other material, having in one case stood for eight years without the slightest perceptible deterioration.

The entire process, from the first wetting of the flour to the turning out of the nicely baked biscuits, occupied just twenty minutes, and four tons a day is the average rate of production.

Another ingenious little contrivance is a small machine for mincing the candied lemon and orange peel used in some sorts of cakes, be regulated with the utmost nicety, and also a steam-heater for soaking cracknells.

Above stairs is a large, light, airy room, where several girls are occupied in packing the various productions into tin cases, whence they are despatched by steamboat or railway to this and all the adjacent colonies, for which the contiguity of the rail and telegraph lines present such facilities as must tend to largely augment the business of this enterprising firm, one of whose specialities is a biscuit for the use of dyspeptic sufferers, composed of a mixture of charcoal prepared from the wood of the acacia and willow. Though not nice to look at they are exceedingly good to eat, and no doubt are as wholesome as they are said to be. 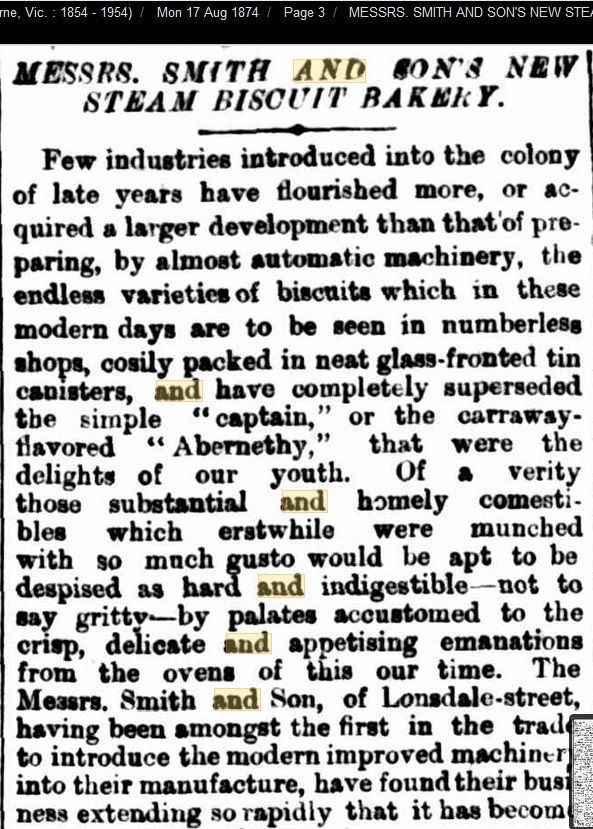 Brockhoff Biscuits was an Australian manufacturer of biscuits founded in 1860 by Adolf F. Brockhoff. In 1963 Arnott’s Biscuits and the company merged, although they continued to trade under both names for several years until the “Brockhoff” name was completely dropped in the late 1970s. 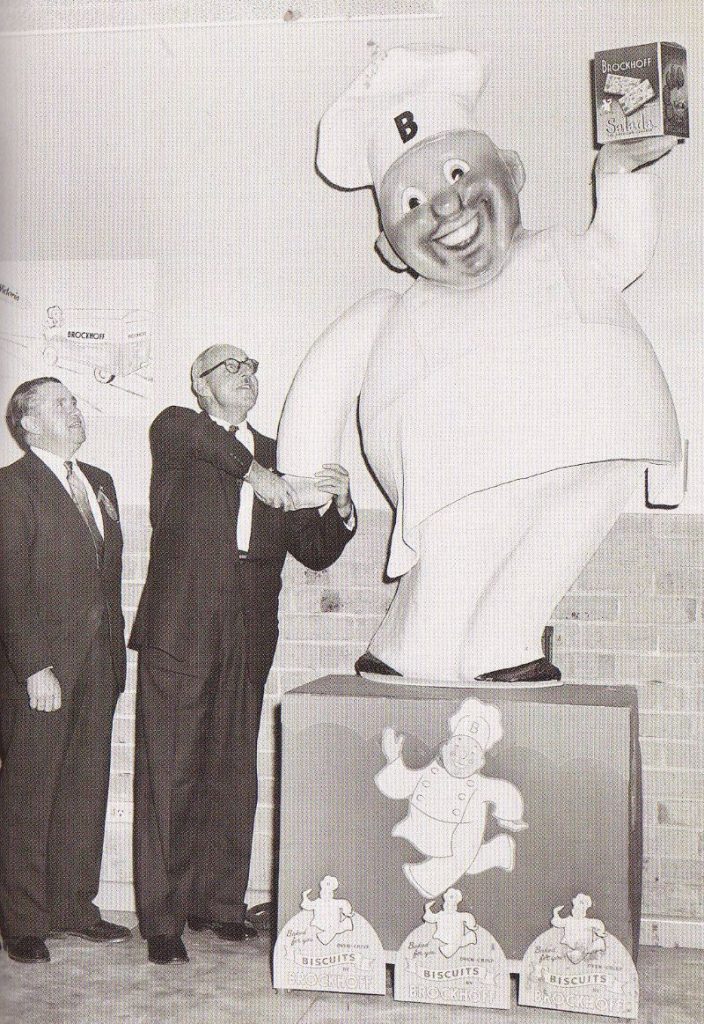