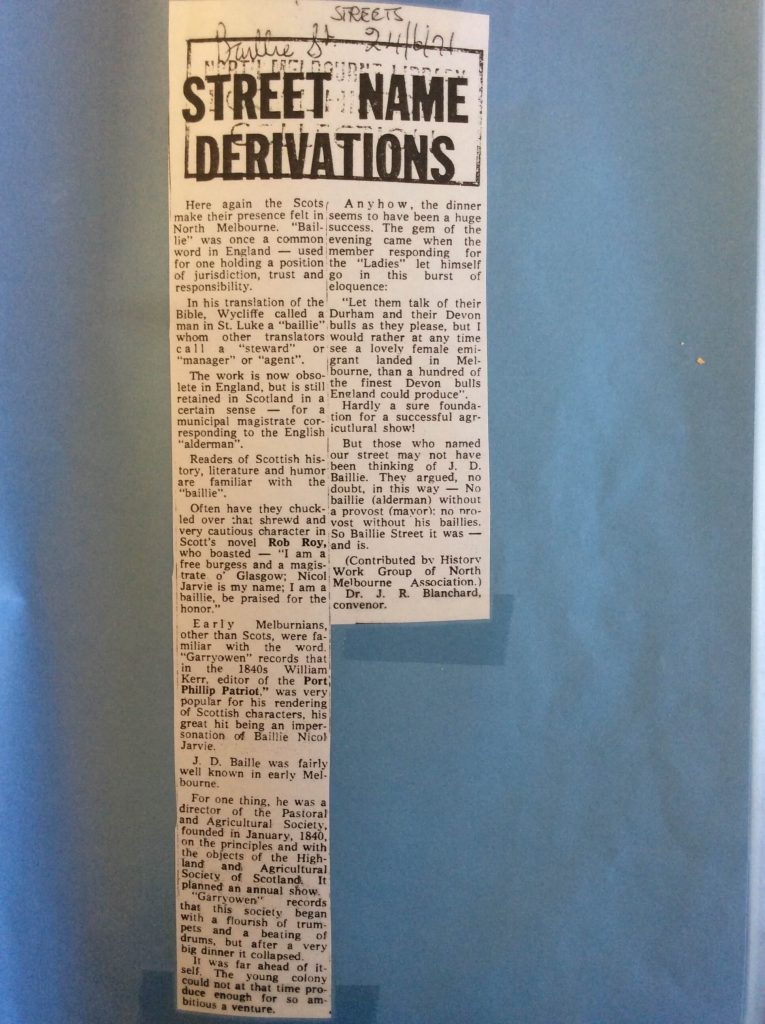 Here again the Scots make their presence felt in North Melbourne. “Baillie” was once a common in England — used for one holding a position of jurisdiction, trust and responsibility.

In his translation of the Bible, Wycliffe called a man in St. Luke a “baillie” whom other translators call a “steward” or “manager” or “agent”.

The work is now obsolete in England, but is still retained in Scotland in a certain sense — for a municipal magistrate corresponding to the English “alderman”.

Readers of Scottish history, literature and humor are familiar with the Baillie.

Often have they chuckled over that shrewd and very cautious character in Scott’s novel Rob Roy, who boasted — “I am a free burgess and a magistrate o’ Glasgow; Nicol Jarvie is my name; I am a be praised for the honor.”

Early Melburnians, other than Scots, were familiar with the word. “Garryowen” records that in the 1840s William Kerr, editor of the Port Phillip Patriot.” was very, popular for his rendering: of Scottish characters, his great hit being an impersonation of Baillie Nicol Jarvie.

For one thing, he was a director of the Pastoral’ and Agricultural Society, founded in January, 1840, on the principles and with the objects of the High-land and Agricultural Society of Scotland. It planned an annual show. “Garryowen” records that this society began With a flourish of trumpets and a beating of drums, but after a very big dinner it collapsed. It as far ahead of it-self. The young colony could not at that time produce enough for so ambitious a venture.

Anyhow, the dinner seems to have been a huge success. The gem of the evening came when the member responding for the “Ladies” let himself go in this burst of eloquence:

“Let them talk of their Durham and their Devon bulls as they please, but I would rather at any time see a lovely female emigrant landed in Melbourne than a hundred of the finest Devon bulls England could produce”.

Hardly a sure foundation for a successful agricultural show!

But those who named our street may not have been thinking of J. D. They argued, no doubt
in this way’ — No baillie (alderman) without a provost (mayor): no provost without his baillies. So Baillie Street it was – and is.(1)