“Capel” became a tragic word in early Melbourne. Down near the wharf, Thomas Capel had his Britannia Brewery where “beer equal to anything in Melbourne” was sold for 2/-a gallon.”

He sold out eventually and and went off to run a larger brewery in Sydney. His wife was to follow him when he was suitably settled. Towards the end of March, 1839, Mrs. Capel set out to rejoin her husband. The ship on which she sailed was wrecked. As far as was known at the time, there were no survivors.

Persistent reports then began coming in of a white woman seen among aborigines in the vicinity of the wreck. Several parties went out at intervals to the rescue, but each time the elusive tactics of the aborigines outwitted them.

In October 1847, the remains of a white woman and a young child were found in the region. The general belief was that this was all that was left of Mrs. Capel and a child born of one of her captors. The shock lingered long in the public memory.(2) 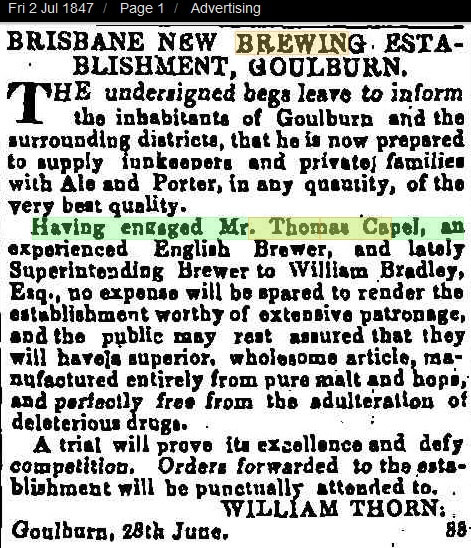 Some people in the past might have considered Capel Street to be named in honour of Thomas Capel the beer brewer, but others believe the street is more likely to have been named by the city forefathers in 1853 after the death of another by the name of Admiral Sir Thomas Bladen Capel GCB (1776-1853).

It makes more sense for Capel Street to have been named after the latter person when one considers the street parallel to Capel is Peel Street, which was named after Sir Robert Peel, 2nd Baronet, FRS was an English Conservative statesman who served twice as Prime Minister of the United Kingdom and twice as Home Secretary. He is regarded as the father of modern British policing, owing to his founding of the Metropolitan Police Service.

In 1854 residents were listed in the Bourke Ward rate book already living in Capel Street. By then Admiral Capel had already died a year earlier and the beer brewer, Thomas Capel died one year later.

Thomas Capel the beer brewer, died in 1855 at Camperdown, Sydney.