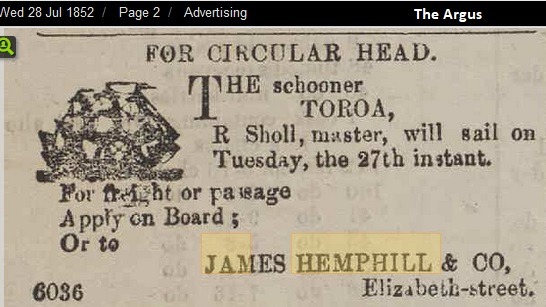 James Hemphill was born in Ireland to father James and mother unknown. He is later found in Sydney NSW, having married Margaret McRae in 1848, he was 27 and she was 21. Margaret was born in 1827 at Rosemarkie, Ross, Black Isle Scotland to parents John McRae and Elizabeth McKenzie. They leave Sydney and arrive in Melbourne sometime between the birth of daughter Elizabeth in Sydney in 1850 and birth of son Charles in 1855 in Melbourne. James opens a business on Elizabeth Street Melbourne next to Passmore’s Hotel, selling grocery staples. James Hemphill was the first crown land purchaser of two pieces of land being lot 7 & 9 on section 56 on Spencer Street West Melbourne, as well as being an agent for inter-coastal ships passage such as the schooner Toroa. By 1858, citizens who include Thomas Short, James Oliver, John Reynolds and 200 others living within the Bourke Ward sign a petition published in the Argus news encouraging Hemphill to stand as a candidate in Melbourne Council elections. In 1859 Hemphill, living in Queen Street Melbourne is elected as the representative of the people for Bourke Ward. The same year he is also appointed to the board …

END_OF_DOCUMENT_TOKEN_TO_BE_REPLACED

The manufacture of register-stove grates and bronzed-fenders has just been introduced into the colony of Victoria by Messrs. Lyster and Cooke, of 192 Bourke-street. In the establishment of this branch of industry, although no enormous mechanical or other obstacles have had to be encountered, and no new invention has been given to the world, yet Messrs. Lyster and Cooke are entitled to credit for having overcome some difficulties, and afforded another illustration of the extent to which the colony may rely upon its own resources for the supply of its various requirements. The firm commenced business in this city about three months ago, as general ironfounders, and directed their attention to the feasibility of making register stove grates and bronzed fenders, for which description of articles the colony has hitherto been dependent upon English manufacturers.   At first their efforts met with little encouragement; they were assured by persons connected with the iron trade that such work could not be executed here, and that no sand existed in the colony possessing the requisite properties for moulding the metal used in the manufacture of the stoves. Perseverance, however, proved these to be fallacies. Messrs. Lyster and Cooke discovered that an abundant …

END_OF_DOCUMENT_TOKEN_TO_BE_REPLACED

The main streets of Bearbrass (Melbourne) never had a chance to assume their names organically — if they had you can bet that there would have been a Fawkner Street among them. But we might also have been endowed names like Sickle Street, Bullock-bog Road, Waterhole Road, and Stump Street, as well as the obvious Forest Street, Hill Street, Mill Street, Church Street, Docks Road and so on. When the Governor of New South Wales, Sir Richard Bourke, visited the settlement in ea. 1837, he named the streets after the usual crowd of royalty, dignitaries and Great Men — himself included. In years to come, no one was quite sure precisely which monarchs he had intended to honour and whose wife Elizabeth was. But nobody liked to ask.(1) Source (1) Robyn Annear. Bearbrass : Imagining Early Melbourne.

In basic terms, historic preservation means safeguarding the existence and appearance of historic elements that are located within our neighborhood. TYPES OF HISTORIC ELEMENTS Structures Houses, commercial and industrial buildings, bridges and monuments – any human-made structure that has some historical value, significance or associated to someone who lived or worked in our neighborhood who became significant in their own right. Historical value resides in the historical element itself. It may be valuable as an example of a style of architecture or an industrial process that’s no longer used, or simply for its age. Many houses that were unremarkable when they were built, for instance, have gained historical value because they’ve lasted, and are among the few left from their time. A Victorian or Edwardian house built from as early as the 1850’s to 1915 are important historically because these are the oldest and grandest of houses compared to new builds in the the inner Melbourne neighborhood. Historical significance usually concerns links between an element, say a building or streetscape and a particular historical event or series of events. Many historically significant buildings, like the North Melbourne Town Hall built in 1875-76 designed by noted architect George Johnson. That specific …

END_OF_DOCUMENT_TOKEN_TO_BE_REPLACED

Please confirm deletion. There is no undo!