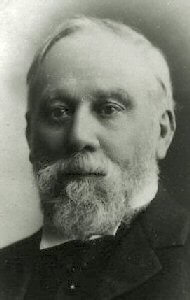 (1)
John Dennistoun Wood, the son of Captain Patrick Wood of the East India Company’s military service, was born at Dennistoun, Tasmania, in 1829.

At the age of 11 he was sent to England to complete his education. At 16 he was a student of the Middle Temple, and six years later he was called to the Bar.

He came to Victoria in 1853 and entered practice before the Supreme Court. Four years later he was elected to the Legislative Assembly, and during the next six years Wood held the office of Solicitor-General, Attorney-General and Minister of Justice in three successive governments.

Retiring from politics, Wood went to live in London, practicing mainly before the Judicial Committee of the Privy Council in colonial appeal cases.

In 1889 he returned to Victoria and practiced at the local Bar. He admitted frankly that his main object was “to make money”

Geoffrey Serie, The Golden Age, classifies Wood as a “liberal opportunist — a smart, city lawyer, with influence in high places, who could wrangle favors for constituencies”.

An impressive speaker and keen debater, Wood and others often turned debates in the House into squabbles of “rowdyism, violence and spite“.

In the gold rush days, when companies mushroomed, politicians were regarded fair game as “decoy ducks.”

Empty-headed.
The Argus urged them to reject “the tempting offer of 500 shares for the use of your name. “Nevertheless, Wood continued one of about 20 director politicians.”

While dismissing radicals as a “frothy and empty-headed race of demagogues,” Wood was an ardent advocate for extension of the franchise. On the Chinese question he was a moderate, believing the licence-tax to restrict Chinese immigration was unfair.

When Hotham was busy giving streets the names of contemporary politicians he included the names of John Dennistoun Wood.(2)

The passing away at the ripe old age of 85 of the Hon. J. D. Wood, has removed a link with the past, and one of the older school of public men, who had very little indeed in common with the politicians of the present day. It is true that it is only five years or so since Mr. Wood ceased to be a member of the House of Assembly, but then he was a survival, and the tone and atmosphere of the place could not, one imagines, have been very congenial to him. He was with the other members, but not of them. Hobart, Oct. 24.1914.(3)