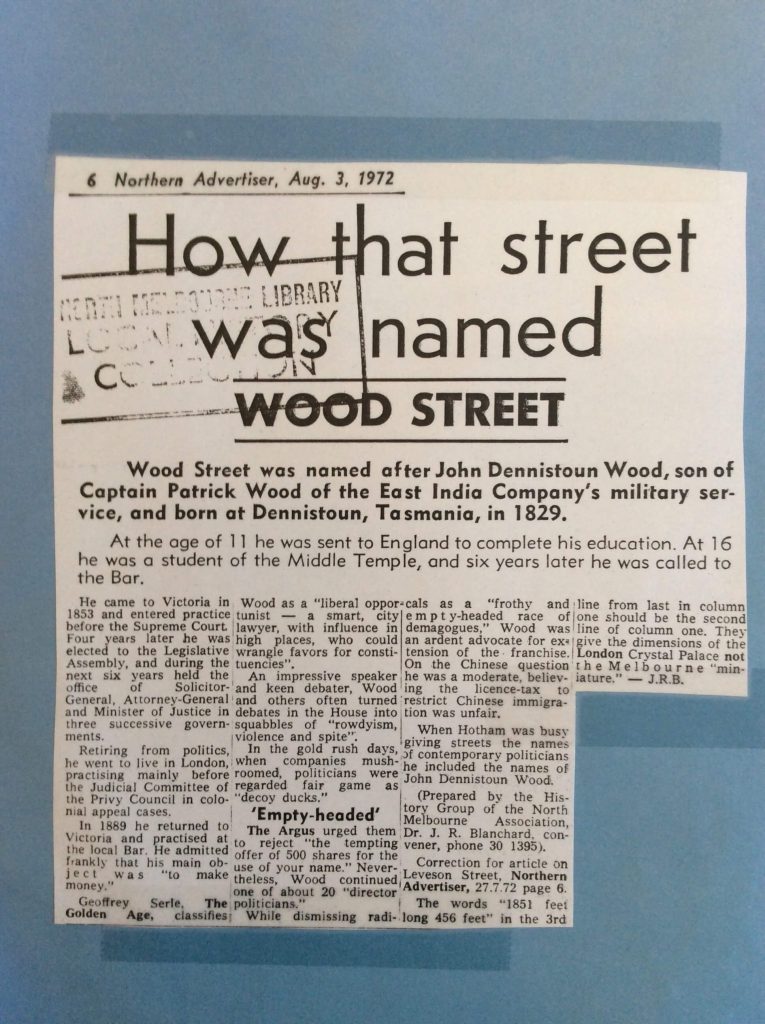 Wood Street is quite short, running in an east west direction between Abbotsford and Dryburgh Streets on the side of Hotham Hill. When settlers arrived in 1835 the area was the lightly treed grassland of a clan of the Kulin Nation. To the north the land rose up to what became Royal Park. One block north of Wood Street is the current Pleasance Gardens which had a rocky outcrop, said to have caves, and this spot was likely a gathering place for the local clan. In the 1850s rock was quarried where Carroll Street now meets the Gardens. To the south the land sloped down to a creek and a vista containing a blue saltwater lagoon. Initially the settlers used the land to graze their cows.

As Melbourne expanded in a north-west direction the Hotham Hill locality was divided into “town allotments”. There were seven allotments on the north side and seven on the south side of Wood Street (as yet unnamed), see detail from Public Lands Office map 14 October 1858. These allotments were auctioned at government land auctions on the 28 December 1865 (north side) and 8 January 1866 (south side). The persons buying there allotments were likely a mix of speculators, developers and local businessmen. The attached detail of a “Compiled Town Record Plan” of the time shows the persons sold these allotments and notes the auction dates – see detail of map.

The new owners very quickly and cooperatively moved to subdivide their allotments and to add lanes to provide access. On the north side the lanes now named Donovans and Homebush were created. Around this time Wood Street was named – after John Dennistoun Wood, a lawyer, born in Tasmania who was elected to the Legislative Assembly in 1857 and served as Solicitor-General in three successive governments. (See article). In July 1866 the Council of the Borough of Hotham decided to fix the level of Wood Street and surrounding streets.

The first person to live in Wood Street was Ann Murphy who in 1866 paid rates on a two room wooden house at the eastern end on the north side (what is now either 2, 4 or 6 Wood Street). In 1870 the rate payer for this house became Bernard Murphy, a labourer.

Wood Street was first separately listed in the rates book of 1867/68 and William Donovan was the second resident with a two room wooden house and stabling at what was to become No 18 – his Certificate of Title to the land is 2nd of July 1868. Donovan purchased the adjoining block (which is now No 16) – title is date 5th of October 1871. (See the listings under “People” for William Donovan and under “Street Addresses” for No 16). By 1870 there were five wooden houses on each side of Wood Street.

Donovan built his large two-story Victorian brick house at 16 Wood Street 1883 and named it Erin House. Two years later he built four two-story Victorian houses, named Erin Terrace, at Nos 8 to 14 and in 1890 he built two two-story shops and dwellings on the northern corner of Wood Street facing Abbotsford Street. He named this the Donovan Building.  It was in this year (1890) that the cable tramway open and ran past Wood Street until 1935, when electrified trams took over.

In 1887 another local identity William Gidney built five single story Victorian terrace houses which became Nos 22 to 30 Wood Street. The lovely Victorian streetscape on the north side is still largely intact. What is amazing is that in the slum reclamation era the Housing Commission seemed to have its eye on these buildings because in 1970 it acquired No 18 Wood Street which at this time was an empty block.

On the south side of Wood Street the very substantial brick Laurel Hotel was built in the early 1880s on the western corner with Dryburgh Street. There were wooden houses and, at the Abbotsford end, there was a large block which was never housing. From at least the 1930s onward the site was covered by the factory of Alfred Stewart Pty Ltd, manufacturers of engineering tools.

As the suburb grew in the 1870s and 1880s fire was a constant threat to the wooden houses whose lighting was predominantly supplied by candles. Volunteer fire brigades appeared and one based on Wood Street was the Hotham Hill Fire Brigade. It was formed about 1880 and for a decade or so was an important local community organisation. A number of fund raising dances at the Hotham Town Hall are reported in newspapers of the time. The Fire Brigade used the Laurel Hotel as its headquarters with the publican Clayton being its captain. It had a hose reel, which may have been supplied by the insurance industry, housed in Wood Street, probably close to the Laurel. If it had horses then these may have been stabled near the Laurel or behind 16 Wood Street.In 1891 a unified government fire brigade service replaced the independent voluntary services and in 1893 the now government operated North Melbourne Fire Brigade gained large new purpose built premises in Curzon Street.

In the 1900s the largest house on the south side of Wood Street was a double fronted Victorian weatherboard at 19 Wood Street. There was empty land on either side and behind were nine horse stables. Up to the 1950s a number of these stables were used for horses which would pull flower carts around the city. For many years in the first half of the twentieth century it was owned by Walter Taylor and his wife Jean (nee Price).

Jean`s grandson Jock O`Brien, born about 1940, grew up living at No 19.  He became a star North Melbourne player for the North Melbourne Football Club and went on to play interstate. In 2019 he reminisced about Wood Street. He particularly remembered the illegal SP bookmaking and two-up schools in Donovans Lane opposite on Friday nights and Saturday. Donovans Lane was ideal because it could be entered from both ends and it was easy to have look-outs posted to warn of approaching police. After raids he would quickly scout around for scattered coins. He also remembered the bottle yard near his house which was entered from a lane off Haines Street next to the Morning Star Hotel. On occasion mates would steal bottles from the yard and later sell them back to the owner.

The character of Wood Street was irrevocably changed in the early 1960s when south side was levelled and three story privately owned apartments built. These were well designed and built – they continue to be sought after properties. In the mid-1940s the Housing Commission had cleared the Abbotsford Street block opposite the end of Wood Street and began building three story public housing. Eleven blocks were built and completed by the end of the 1950s. As of 2019 these are being demolished for redevelopment into a mix of public and private housing.

In the early 1960`s as well as  having private apartments built on the south side, the land at the northern corner with Dryburgh Street was developed – a rather unprepossessing three story block of private 12 apartments was built. This land, initially stables in 1880s, had been used for commercial purposes, most recently being owned by Clark King & Co, stockfeed producers and wholesalers.

In the 1970s Wood Street was becoming gentrified with middle class families buying properties and with students and professionals renting. Working class people had been relocated from the south side and on the north a number of working class and often migrant owners were selling and moving to the outer suburbs.

It was in the mid -1970s that Rob Snashall, of 18 Wood Street, took the initiative and with neighbours’ support convinced the Council to landscape the street with garden beds and a mix of eucalypts and deciduous trees. Angle parking between the garden beds was introduced. One unexpected result was the number of petticoat palms that grew in these garden beds. They were self-sown from a palm that was in the small front garden of 24 Wood Street (removed about 1990). Apparently each of the five houses in the terrace had at one stage had tall palm trees. Around 2010 the Council had a few spare mature palms of a different variety and these were added to the garden beds at both ends of the street.

A strong community spirit on developed on the north side of Wood Street in the mid-1970s. One result were street parties, for a few years, on the first Sunday in December which effectively closed the street. This neighbourly spirit continues at the time of writing. 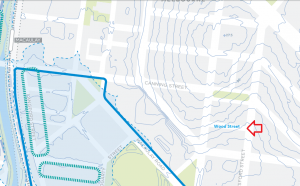 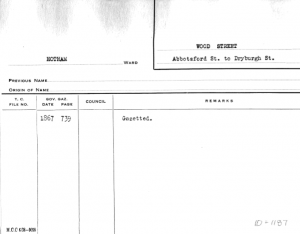 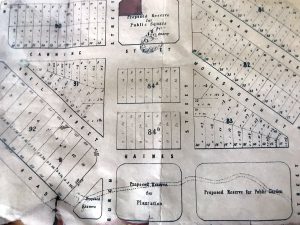 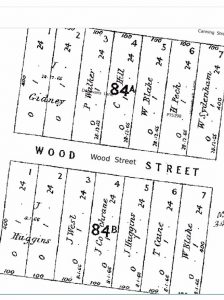 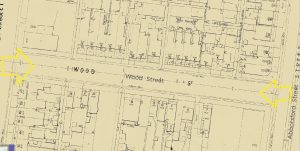 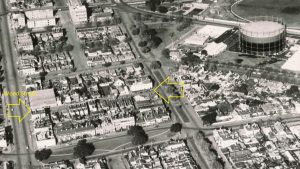 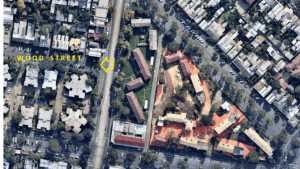 Wood Street in May 2020 with the public housing across Abbotsford Street being prepared for demolition. Photo DHHS. 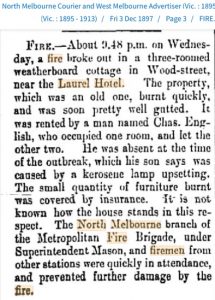 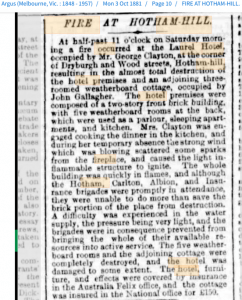 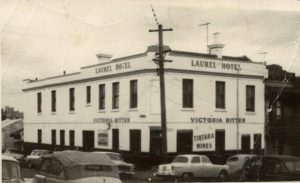