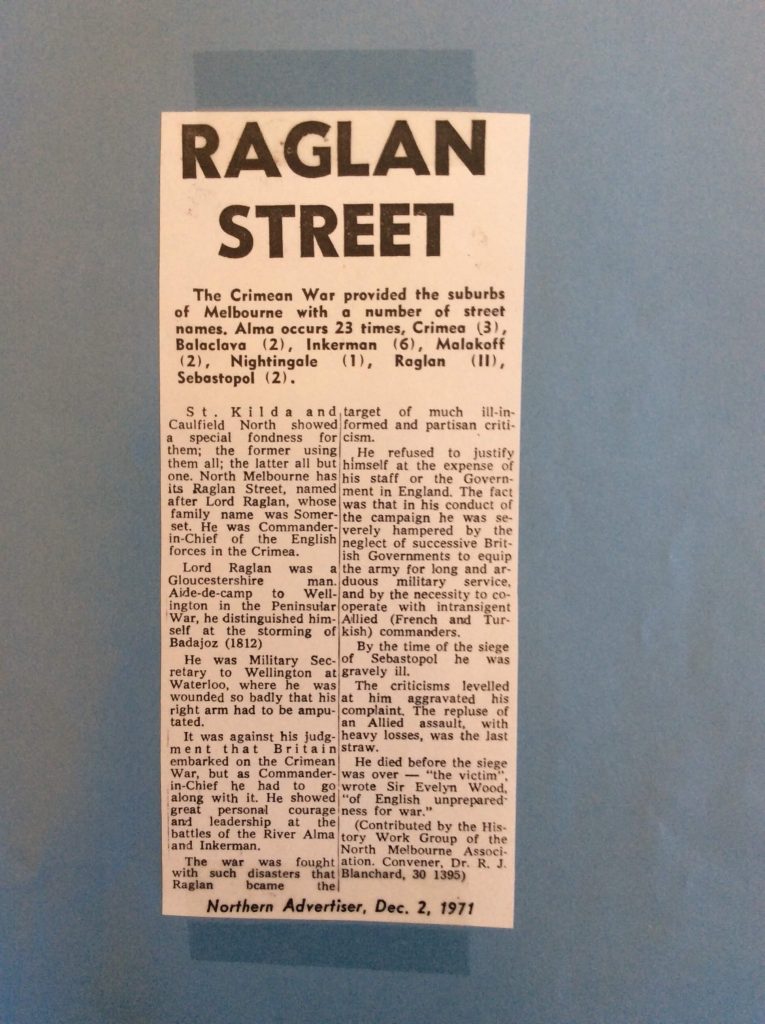 St. Kilda and Caulfield North showed a special fondness for them; the former using them all; the latter all but one. North Melbourne has its Raglan Street, named after Lord Raglan, whose family name was Somerset. He was Commander in-Chief of the English forces in the Crimea.

Lord Raglan was a Gloucestershire man. Aide-de-camp to Wellington in the Peninsular War, he distinguished him at the storming of Badajoz (1812)

He was Military Secretary to Wellington at Waterloo, where he was wounded so badly that his right arm had to be amputated.

It was against his judgment that Britain embarked on the Crimean War, but as Commander in-Chief he had to go along with it. He showed great personal courage and leadership at the battles of the River Alma and Inkerman.

The war was fought with such disasters that Raglan became the target of much ill-informed and partisan critiicism.

He refused to justify himself at the expense of his staff or the Government in England. The fact was that in his conduct of the campaign he was severely hampered by the neglect of successive British Governments to equip the army for long and arduous military service, and by the necessity to cooperate with intransigent Allied (French and Turkish) commanders.

By the time of the siege of Sebastopol he was gravely ill.

The criticisms levelled at him aggravated his complaint. The repluse of an Allied assault, with heavy losses, was the last straw.

He died before the siege was over — “the victim”, wrote Sir Evelyn Wood, “of English unpreparedness for war.”(1)