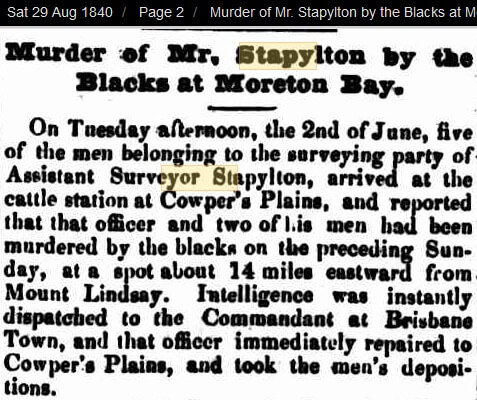 In March 1836, Major Mitchell set out from Sydney on his famous overland expedition that reached Portland, Victoria. Second in command of his party of 23 was Granville William Chctwynd Stapylton, (1800-1840), whose paternal grandfather was the fourth Viccount Chetwynd, Clerk of the Privy Council at the time of his death in 1821.

En route from the present Harrow to Casterton, Mitchell crossed, inter alia, a tributary of the Glenelg River. The township of Chetwynd stands on this tributary today, about mid-way between Casterton and Edenhope.

Chetwynd is an Irish Viscounty. Its seat is Berehaven (County Cork), the name applied to the most southerly of the three picturesque peninsulas of S.W. Ireland, which extend into the Atlantic. The waters of the beautiful Kenmure River and Bantry Bay wash its shores.

Stapylton came to Australia in 1828 as assistant surveyor in New South Wales. He carried out a number of difficult surveys near Sydney and on the Western Plains from Bathurst. His work was highly praised by the Colonial Office and the Surveyor-General T. L. Mitchell.

When Mitchell’s party returned to Sydney early In November, 1836, it was decided that Stapylton should go to Port Philip to work under the direction of Senior Surveyor Robert Hoddle, who wrote in his Journal that, in marking out North and East Melbourne, he made the streets sixty-six feet wide.

After some delay, Stapylton set out overland for Melbourne, arriving there in April 1838. About this time he seems to have fallen a victim of intemperance. The Administrator of Port Philip, Captain Lonsdale had to complain that Stapylton had been so drunk that the Chief Constable was forced to confine him, and that on another occasion he was found drunk under his dray. Lonsdale suspended him from duty at last.

Later, Governor Gipps reinstated him and he was sent to work under Robert Dixon at Moreton Bay.

While engaged in surveying the coast south of Brisbane, aborigines attacked his camp, and he was killed on the 31st May 1840. His body was brought to Brisbane.

Stapylton has left behind him the name of his Paternal grandfather in our Chetwrnd Street, North Melbourne.(1)