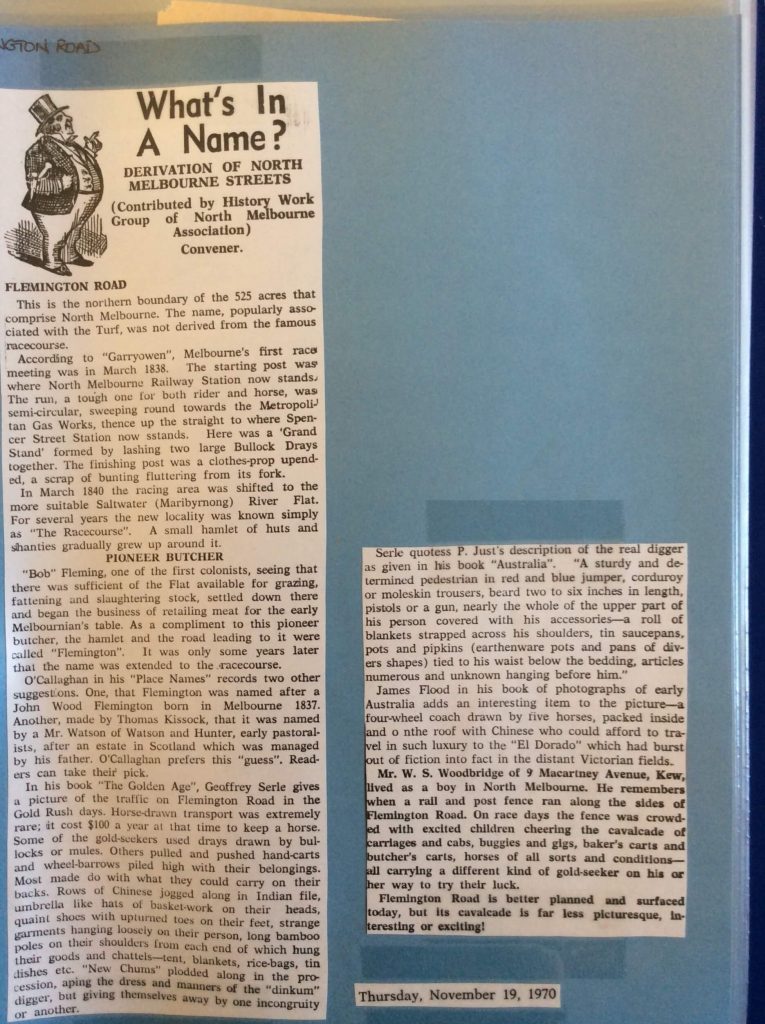 This is the northern boundary of the 525 acres that comprise North Melbourne. The name, popularly associated with the Turf, was not derived from the famous racecourse.

According to “Garryowen”, Melbourne’s first race meeting was in March 1838. The starting post was where North Melbourne Railway Station now stands. The run, a tough one for both rider and horse, was semi-circular, sweeping round towards the Metropolitan Gas Works, thence up the straight to where Spencer Street Station now stands. Here was a ‘Grand Stand’ formed by lashing two large Bullock Drays together. The finishing post was a clothes-prop upend-ed, a scrap of bunting fluttering from its fork.

In March 1840 the racing area was shifted to the more suitable Saltwater (Maribyrnong) River Flat. For several years the new locality was known simply as “The Racecourse”. A small hamlet of huts and shanties gradually grew up around it.

PIONEER BUTCHER  “Bob” Fleming, one of the first colonists, seeing that there was sufficient of the Flat available for grazing, fattening and slaughtering stock, settled down there and began the business of retailing meat for the early Melbournian’s table. As a compliment to this pioneer butcher, the hamlet and the road leading to it were called “Flemington”. It was only some years later that the name was extended to the racecourse.

O’Callaghan in his “Place Names” records two other suggestions. One, that Flemington was named after a John Wood Flemington born in Melbourne 1837. Another, made by Thomas Kissock, that it was named by a Mr. Watson of Watson and Hunter, early pastoralists, after an estate in Scotland which was managed by his father. O’Callaghan prefers this “guess”. Readers can take their pick.

In his book “The Golden Age”, Geoffrey Serle gives a picture of the traffic on Flemington Road in the Gold Rush days. Horse-drawn transport was extremely rare; at cost $100 a year at that time to keep a horse. Some of the gold-seekers used drays drawn by bullocks or mules. Others pulled and pushed hand-carts and wheel-barrows piled high with their belongings. Most made do with what they could carry on their backs. Rows of Chinese jugged along in Indian file, umbrella like hats of basket-work on their heads, quaint shod with upturned toes on their feet, strange garments hanging loosely on their person, long bamboo poles on their shoulders from each end of which hung their goods ” and chattels—tent, blankets rice-bags, tin dishes etc. New Chums” plodded along in the procession, aping the dress and manners of the “dinkum” digger, but giving themselves away by one incongruity or another.

Serle quotes P. Just’s description of the real digger as given in his book “Australia”. “A sturdy and determined pedestrian in red and blue jumper, corduroy or moleskin trousers, beard two to six inches in length, pistols or a gun, nearly the whole of the upper part of his person covered with his accessories—a roll of blankets strapped across his shoulders, tin saucepans, pots and pipkins (earthenware pots and pans of divers shapes) tied to his waist below the bedding, articles numerous and unknown hanging before him.”

James Flood in his book of photographs of early Australia adds an interesting item to the picture—a four-wheel coach drawn by five horses, packed inside and on the roof with Chinese who could afford to travel in such luxury to the “El Dorado” which had burst out of fiction into fact in the distant Victorian fields.

Mr. W. S. Woodbridge of 9 Macartney Avenue, Kew, lived as a boy in North Melbourne. He remembers hen a rail and post fence ran along the sides of Flemington Road. On race days the fence was crowded with excited children cheering the cavalcade of carriages and cabs, buggies and gigs, baker’s carts and butcher’s carts, horses of all sorts and conditions—carrying a different kind of gold-seeker on his or her way to try their luck.

Flemington Road is better planned and surfaced today, but its cavalcade is far less picturesque, interesting or exciting!(1) 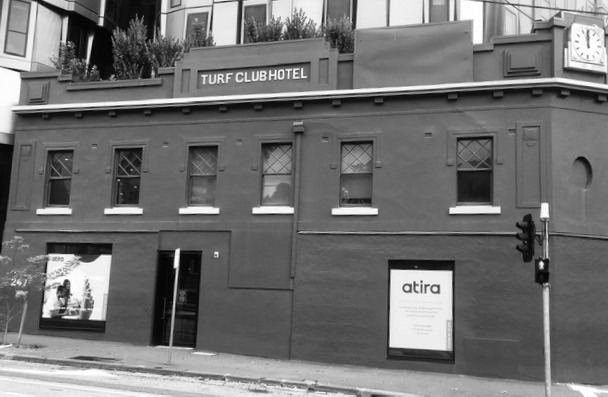 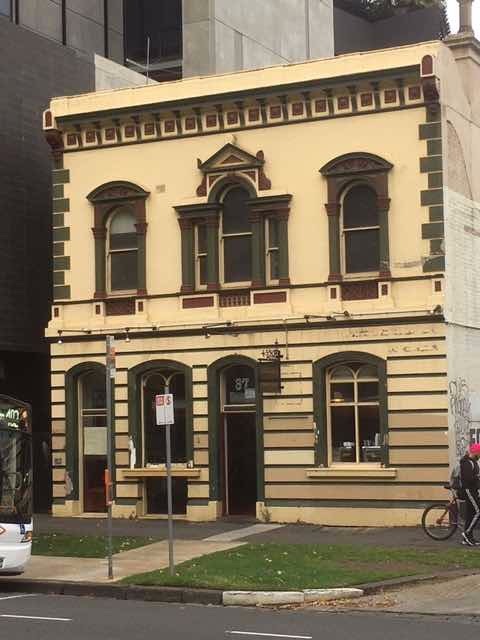 Also known as Address A treat of France cafe 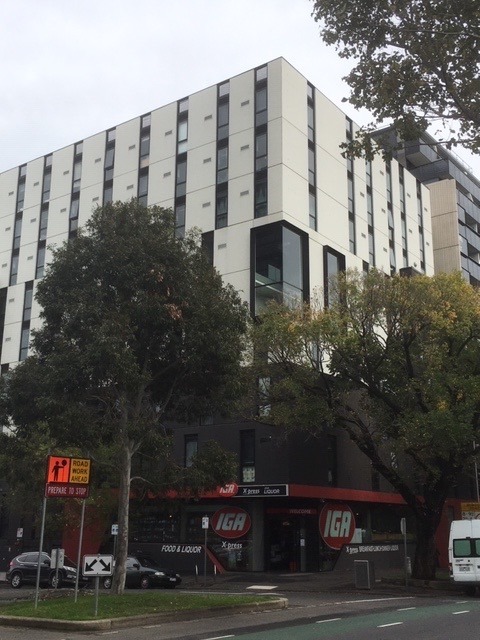 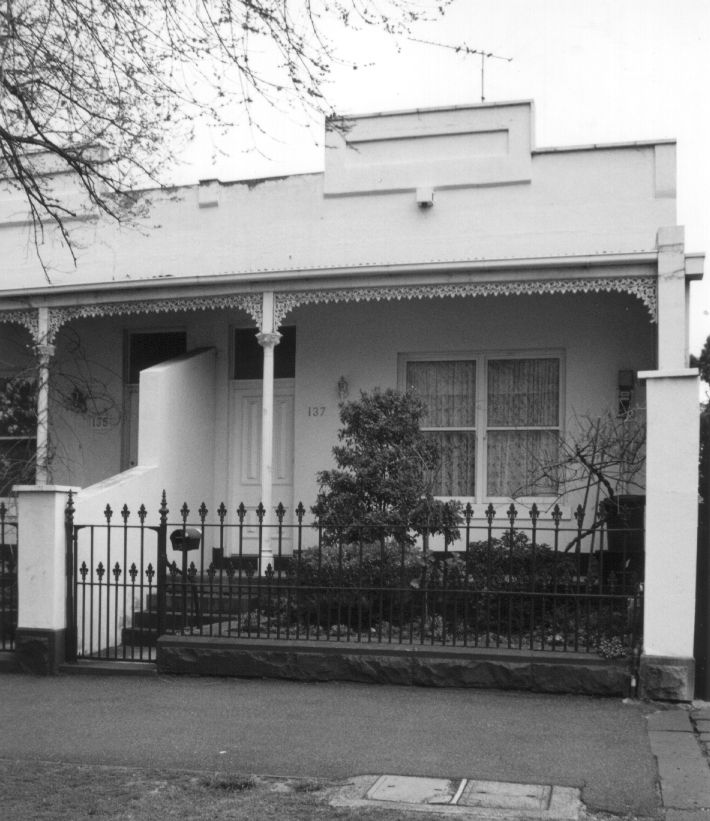 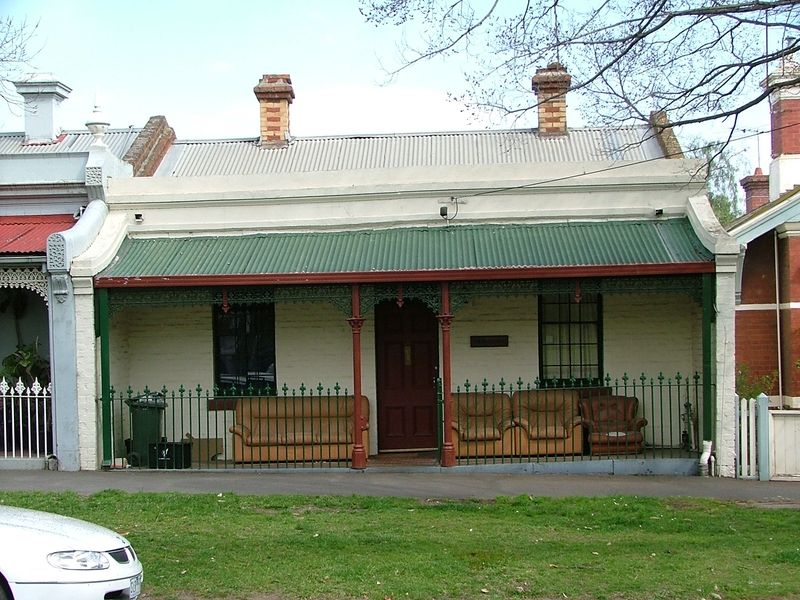