Batman Street has previously been called Roebuck Street (1a 1b) then in 1851 it was changed to Franklin Street West (2) according to old maps, Sands & McDougall directories and the Government Gazette. 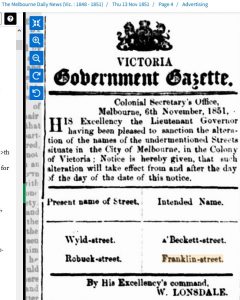 “Colonial Secretary’s Office, Melbourne, 6th November, 1851, HIS Excellency the Lieutenant Governor having been pleased to sanction the alteration of the names of the undermentioned Streets situate in the City of Melbourne, in the Colony of Victoria: Notice is hereby given, that such alteration will take effect from and after the day if the day of the date of this notice. By His Excellency’s command, W. Lonsdale”

In 1895 Franklin Street (as it was known) had 50 Victoria era homes, a Wesleyan church, a vinegar brewery, a paper mill, a hotel and the rear of Victorian Iron Rolling works. Long gone are all of the historically valued terrace homes, these days the street hosts high rise blocks of flats, the Metropolitan Fire Brigade and St Jame’s Old Cathedral on the corner of Batman and King Street.

(1a) 1852 map Plan of the City of Melbourne And Its Extension Northwards created by Charles Laing, surveyor, held by State Library of Victoria.