Molesworth the street begins at Haines Street and ends at Abbotsford Street and according to North Melbourne historian Dr. J.R. Blanchard, the street is thought to have been named after Sir Robert Molesworth (1806-1890).

Robert was born and raised in Ireland, he had a promising legal career on the Munster Circuit, and married a Reverend’s daughter in 1840. They set sail for Australia in the 1850s and established a legal practice in Melbourne at the dawn of the Victorian Gold Rush.

By age 47, Robert was appointed acting Chief Justice in 1853 after William à Beckett stood aside due to illness. Molesworth’s career skyrocketed within a short space of time. Appointed Solicitor-General of Victoria by 1855, under Premier Haines. In 1856 Molesworth was appointed, a Supreme Court Judge and remained at the bar until retirement in 1886, aged 80.

A hard worker, it was said he never took leave except for Court vacations. Noted for his industry, courtesy, learning and expedition; few of his legal decisions were successfully challenged in court. Chief Justice Griffith remarked in 1897, ‘It is a well-known fact that the mining law of Australia was practically made by the decisions of Justice Molesworth and the Supreme Court of Victoria!’

Privately though, the Molesworth’s bitter and prolonged divorce became talk of Melbourne, with a seasoning of celebrity scandal, outraged colonial sensibilities, and, in today’s terms, ‘sex appeal‘. Mrs. Molesworth is said to have had two affairs and fell pregnant with an illegitimate child and exiled herself to England.

A little-known fact, the Molesworth family donated their 1880s waggonette to Sovereign Hill Museum and is still on display. 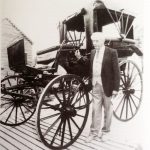 The first documented family home to be built at 66 Molesworth Street, was designed by Crouch & Wilson, Architects for Samuel G. King in 1865.

In 1866 more allotments came to market. Lord Mayor of Hotham, John Barwise was one of many, land speculators at that time. He bought two allotments on both sides of the street. Rates levied on vacant land in 1866 were a steal at only £6 a year. 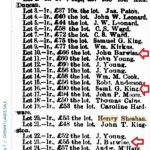 Contractor Henry Sheahan purchased allotment 20 in 1865. By 1866 the rate book shows they lived in an unfinished wood house of 2 rooms at 42 Molesworth Street. In 1867 three more families, moved in and built homes in Molesworth Street, with the Dick’s, Larkham’s and O’Connell’s, the same year State Government officially gazetted the street. 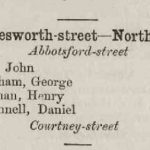 North side of Molesworth Street in the Sands & McDougall directory of 1865.

Widow, Elizabeth Fraser aged 41 years, and her 7 children lived at 10 Haines Street in 1917 and later moved just around the corner to 43 Molesworth, the family remained there until 1943. Her husband Ernest Fraser had been killed in WW1 at the battle of Fromelles, France in 1916. One of her children, Ernest Fraser would later become a North Melbourne milkman.

In the 1930s, State Government declared thousands of historical homes around our city as “slums”. Debate grew, focused on new Public Housing to replace the “slums”. Demolition on Molesworth Street commenced in the 1950s, and within five years all 34 heritage homes on the southern side of the street were obliterated and it was transformed into a Public Housing Estate. Frances Hansen of 31 Molesworth was the last person in 1955 to occupy a Victorian era home on the ‘estate’ side of the street.

Catch a glimpse of the area in the historic photo taken at the corner of Molesworth (L) and Abbotsford Street looking south towards Haines Street (R) in the image below. 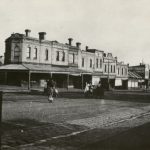 Anybody who has watched ‘Restoration Australia’ on ABC TV will know, Molesworths’ heritage homes, in any condition, could have been revitalised and brought back to productive life, not only for the benefit of residents, but also to maintain continuity of the surrounding streetscape. Home restoration of existing dwellings is the highest form of residential sustainability.

In 1984 Peter Hayes purchased and revitalised a “run-down” Daylesford House, 98 Molesworth Street from Agnes Smith. The restoration task was huge, but the results achieved were spectacular. The rear garden is an oasis of pure tranquillity, it is a must see.

In 1996 The National Trust placed a heritage classification B6768 on 66 to 74 Molesworth Street, North Melbourne due to the heritage significance of its buildings saying: “Architecturally the five buildings are a timber cottage type, simply derived from the Gothic Revival. The combination of style and materials are unusual for nineteenth century houses built within inner Melbourne, particularly as they are an early and compact group in an uncommon configuration, with all having gabled roofs, carved barge boards and gable finials. The planned off street siting of 68 and 70 Moleswoth Street is historically significant as it is now unusual in inner Melbourne.”

“It was once more common in North Melbourne where house construction was purposely kept outside the Melbourne Building Act until the late nineteenth century to provide a haven for low cost worker housing. They were occupied by small retailers and local artisan families and hence they are particularly expressive of North Melbourne’s distinct nineteenth century character, compared with the more affluent inner suburbs such as nearby Carlton, North Carlton and Parkville. Culturally the group provides an early and complete example of the importance of property development as a form of finanical security for artisans, their unusual congfiguration expressing maximum utilisation of off-street frontages by the property owners, allowing more attractive street frontages for tenants. “

Residents ought not be lulled into the thought of a safe future for local heritage of this street or nurture any false sense of security over such a heritage classification. Some Governments both municipal and state in the past have allowed developers to disregard the value we place on our heritage dwellings and sometimes let them demolish and build whatever they propose, regardless of the surrounding residents.

Of the original 80 historic dwellings in the street that were listed in the Sands & McDougall directory in 1900, only 43 heritage dwellings remain in 2021.

Fast forward to 2021, the 112 mid century flats of the Public Housing Estate on the southern side of Molesworth Street are gone. A redevelopment of 303 new flats plus a school is proposed, according to a Department of Health and Human Services Victoria report. Background and historical Public Housing redevelopment issues in other states of Australia.

Do you know more about lives of local families of North and West Melbourne and would like to share their stories or old photos? Contact us today.

The service to early Victoria of either or both of two men accounts for this North Melbourne street name.

Sir William Molesworth, graduate of Trinity College, Cambridge, shared with one other, the role of chief spokesman of the Colonial Reform Association, London, whose main policies, very liberal to the colonies, gained official adoption. Later, as Secretary for the Colonies, he drafted a Bill which reconciled conflicting definitions in three other Drafts, and gave Victoria a Constitution for responsible Government. He approved Governor Hotham’s financial policies, but severely and bluntly criticised him in other matters.

Sir Robert Molesworth, graduate of Trinity College, Dublin, in Arts and Law, practiced for several years in the Munster Circuit, South Ireland, and migrated to Adelaide in 1852, shortly afterwards moving to Melbourne. In 1854 he was appointed Solicitor General, in which capacity he had to assist the Attorney General in the futile prosecution of the Ballarat “rebels”.

Our Molesworth Street in North Melbourne is well-named.(1) 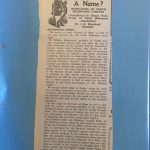