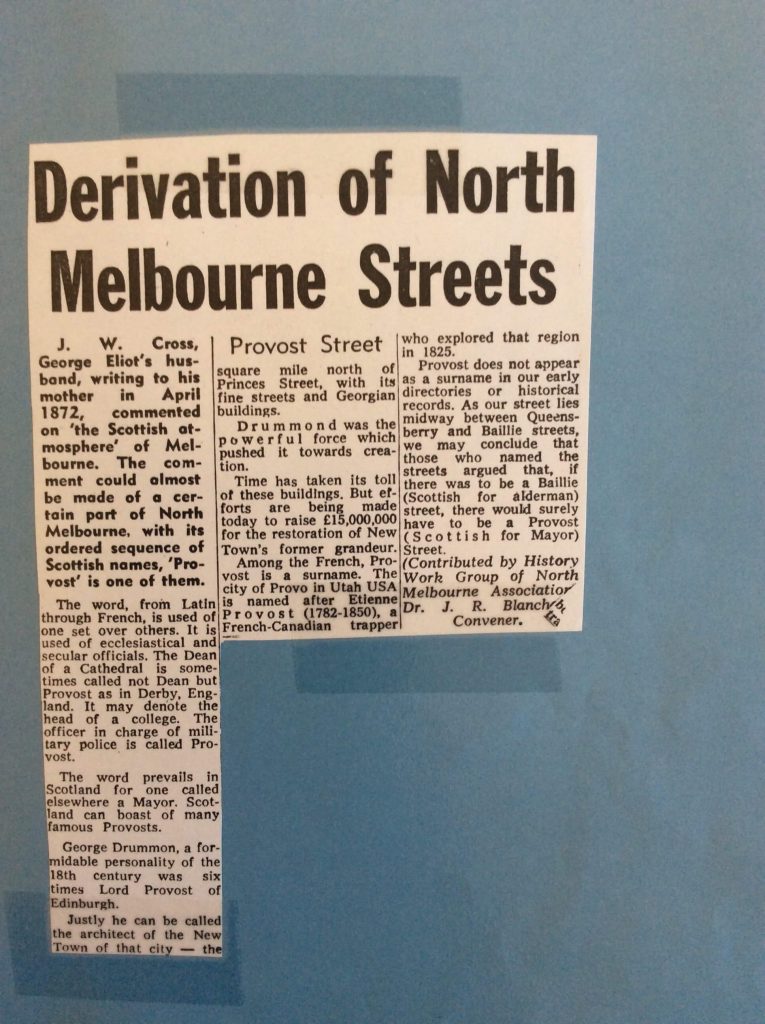 J. W. Cross, George Eliot’s husband, writing to his mother in April 1872, commented on ‘the Scottish atmosphere’ of Melbourne. The comment could almost be made of a certain part of North Melbourne, with its ordered sequence of Scottish street names, ‘Provost’ is one of them.

The word, from Latin through French, is used of one set over others. It is used by ecclesiastical and secular officials. The Dean of a Cathedral is sometimes called, not Dean but, Provost as in Derby, England. It may denote the head of a college. The officer in charge of military police is also called Provost.

The word prevails in Scotland for one called elsewhere, a Mayor. Scotland can boast of many famous Provosts in its romantically rich history.

George Drummon, a formidable personality of the 18th century was six times Lord Provost of Edinburgh.

Justly he can be called the architect of the New Town of that city – the square mile north of Princes Street, with its fine streets and Georgian buildings.

Drummond was the powerful force which pushed it towards creation.

Time has taken its toll on these buildings. But efforts are being made today to raise £15,000,000 for the restoration of New Town’s former grandeur.

Among the French, Provost is a surname. The city of Provo in Utah USA is named after Etienne Provost (1782-1850), a French-Canadian trapper who explored that region in 1825.

Provost does not appear as a surname in our early directories or historical records. As our street lies midway between Queensberry and Baillie streets, we may conclude that those who named the streets argued that, if there was to be a Baillie (Scottish for alderman) street, there would surely have to be a Provost (Scottish for Mayor) Street.(1)